A Taste of Hanoi – The egg coffee

A taste of Hanoi’s famed cà phê trứng or egg coffee got me out of my comfort zone of a regular black coffee without sugar to try a new treat. 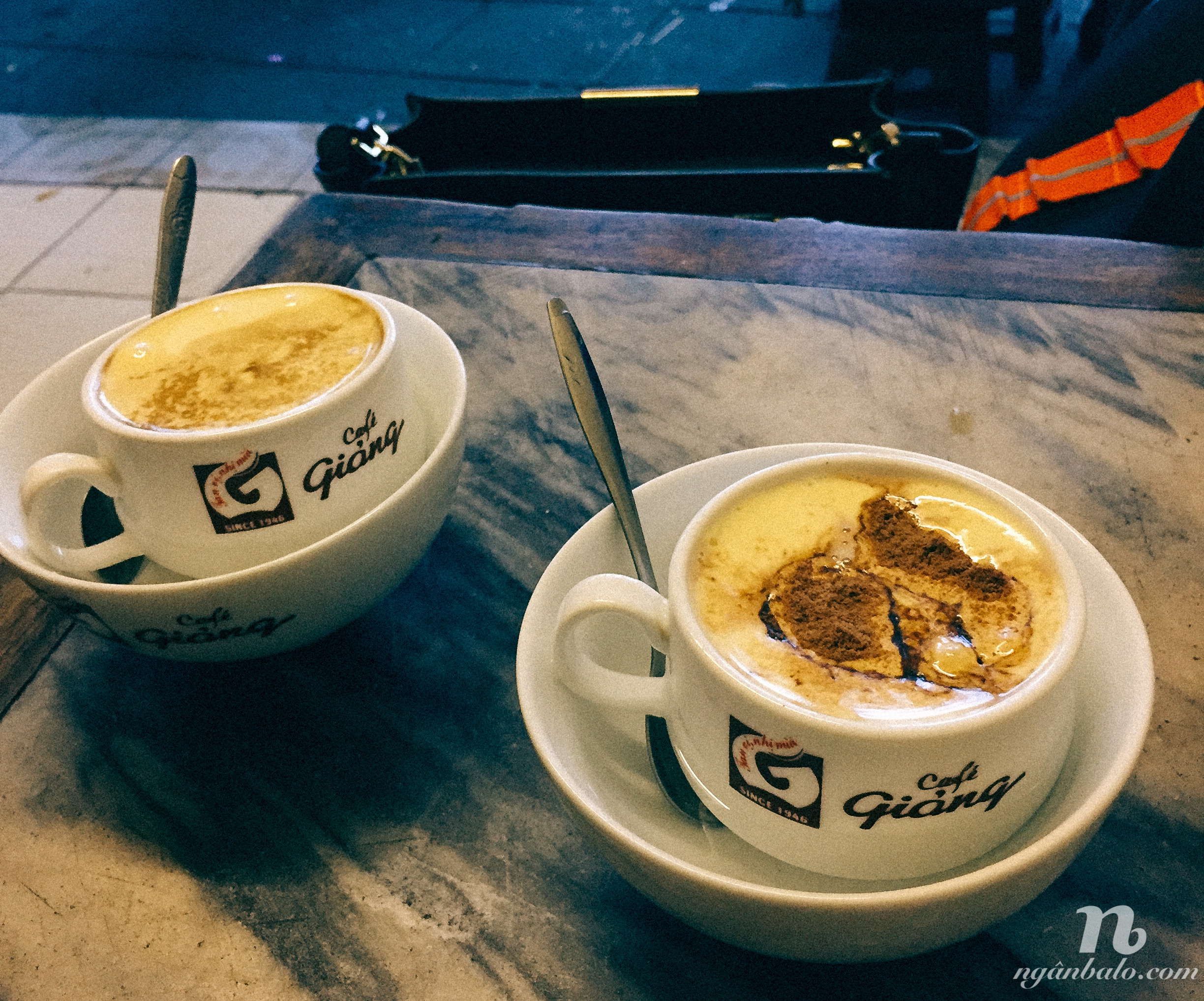 Treat is the right description, as it can be a typical drink you sip to the end, or a pudding-like sweet treat with thick foamy topping and condensed coffee underneath that you can mix, eat and enjoy each bite of the mixture.
As a beginner, I hesitated at first on how to tackle the cup full of fluffy ivory foam, on top of it decorated with sketches in chocolate sauce or wording in chocolate powder like in a cappuccino. In some cafés, the cup comes with a teaspoon already dipped in, in others, the spoon rests outside on a plate, or in a bowl of hot water to keep the coffee warm till the end.
“Should I eat or drink?” asked Janine, an American visitor from HCM City that I met at Café Đinh. Her order, hot egg coffee, came with a foamy topping decorated with sketches of Hoàn Kiếm Lake, while her brother Michael’s order, iced egg coffee, was topped with sketches of Hanoian streets.
“The décor is so beautiful I don’t want to break it,” Janine said with a look of wonder on her face. With my encouragement, she first tried a spoon of foam, then exhaled with a smile: “Wow, it doesn’t have any fishy egg smell like in its name.”
Janine is right, a whisked egg yolk mix with your coffee may sound strange, but even picky drinkers won’t be disappointed.
Why egg coffee?

Hanoi’s egg coffee is thought to have originated from a bartender at the Metropole Hotel, Nguyễn Văn Giảng, who invented a recipe to use whisked egg yolk as a substitute for fresh milk that was often short in the 1940s.
Egg yolk is whipped until it becomes a creamy soft, meringue-like white foam and is poured into a cup with hot black condensed coffee that seeps through the foam so it perches on top of the cup.
“What may sound simple now was a whole new thing at that time, my father was very smart to try it,” Nguyễn Văn Đạo, Giảng’s son, said of his father’s invention. Đạo said his father’s recipe, which included yolk, condensed milk, coffee powder, butter, cheese and some secret ingredients was passed down to his children.
All foreigners and Vietnamese in the Metropole liked Giảng’s coffee so much he decided to leave the hotel to start selling egg coffee and create his own brand – Café Giảng – in 1946.
The café now is owned and run by Giảng’s youngest son and Đạo’s brother, Nguyễn Trí Hòa, who later expanded the business and offers various new recipes such as egg coffee with rum, green bean, chocolate, cinnamon, and green tea, as well as egg beer. The menu may have developed, but Hòa has kept the iconic brand name, while his other brother and sister named their coffee shops differently.
Plenty of tastes

Café Giảng, inside a small alley at 39 Nguyễn Hữu Huân Street, is well-known to locals and tourists alike and is always full of regulars.
It is reputed for its brand name, its appearance in CNN’s coverage of Hanoi street food, for serving hundreds of journalists at the press centre during the Trump-Kim Summit in February 2019 and for opening a franchised Café Giảng in Yokohama in Japan in 2018.
A few blocks away, Giảng’s daughter Bích opened Café Đinh at 13 Đinh Tiên Hoàng Street, also inside a small alley and steps of walk-up to a second-floor old house overlooking Hoàn Kiếm Lake. The café is now managed by Bích’s son, Tạ Huy Lân, and his friends who work part-time in the café so dear to their student life.
Café Đinh, known for its simple and cosy atmosphere, is frequented by students and backpackers.
“I want to keep every single chair and stool in the shop as to keep valuable memories from my mother’s hard time when her teacher friends donated small wooden tables and chairs,” Lân said.
“I am determined to keep our coffee with the taste we inherited from our grandfather Giảng’s recipe,” Lân said.
To keep quality high, Lân says they never choose anything other than grade A robusta coffee from Buôn Ma Thuột City in Đắk Lắk Province.
The final part of my quest to learn more about egg coffee came after my friend La Trang recommended I try the treat at Luk Lak Restaurant on 4A Lê Thánh Tông Street where she says has the best egg coffee in town.
Trang says what she likes about the coffee there is the mixture of creamy foam and coffee is so well blended it goes well until the last bite, and on top of that, the taste is not too sickly sweet.
I never thought I would go to a restaurant for a coffee, even though I had already been to lunch and dinner at Luk Lak, where delicious Vietnamese dishes are served by a chef who worked many years in the Metropole Hotel.
However, from first to the last bite, I couldn’t agree more with my friend Trang. So decadent!
By Minh Huyền. This story was originally posted on Vietnam News
Posted at 2020 Jun 12 11:18
Go back