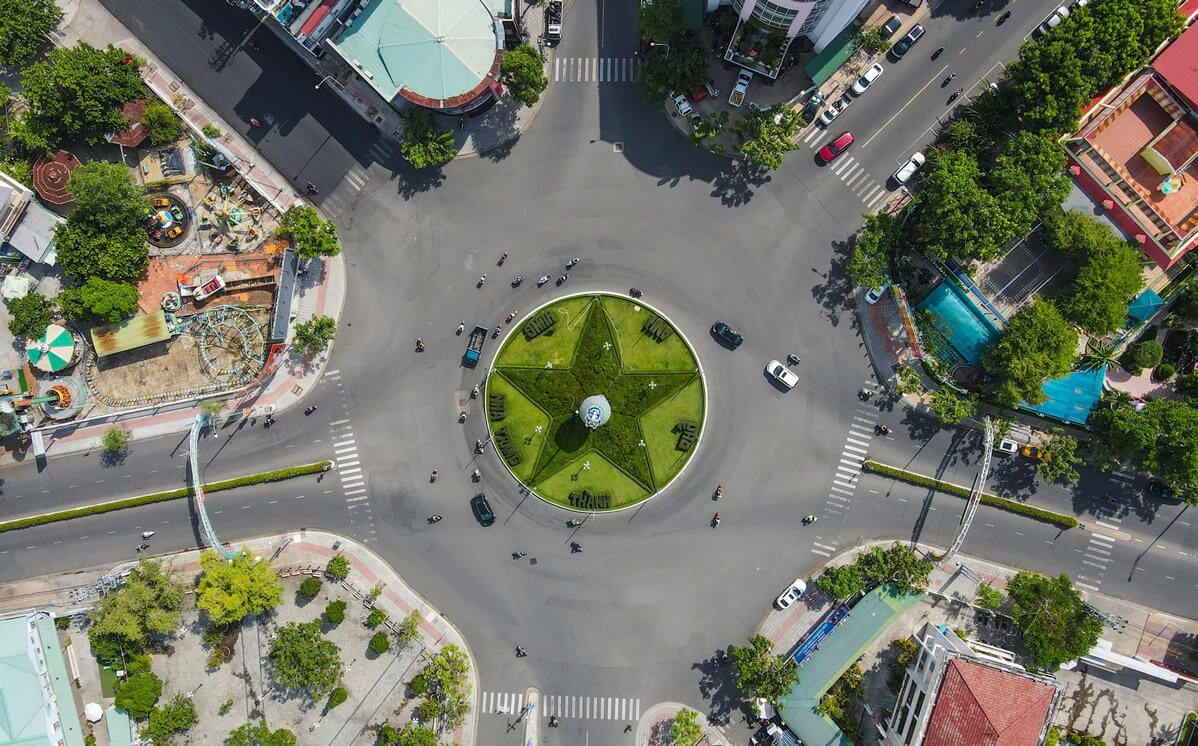 The roundabout in downtown Nha Trang, a top beach destination in the central province of Khanh Hoa, stands idle, allowing a breath of fresh air to pass through the usually congested intersection.
Since July 9, the 252-square-kilometer beach town of over 500,000 people entered a 14-day social distancing campaign under government Directive 16, which bans gatherings of more than two people in public and asks people to only leave home for emergencies, buying food and medicine, along with working in factories, production facilities and businesses involved in "essential" goods and services. 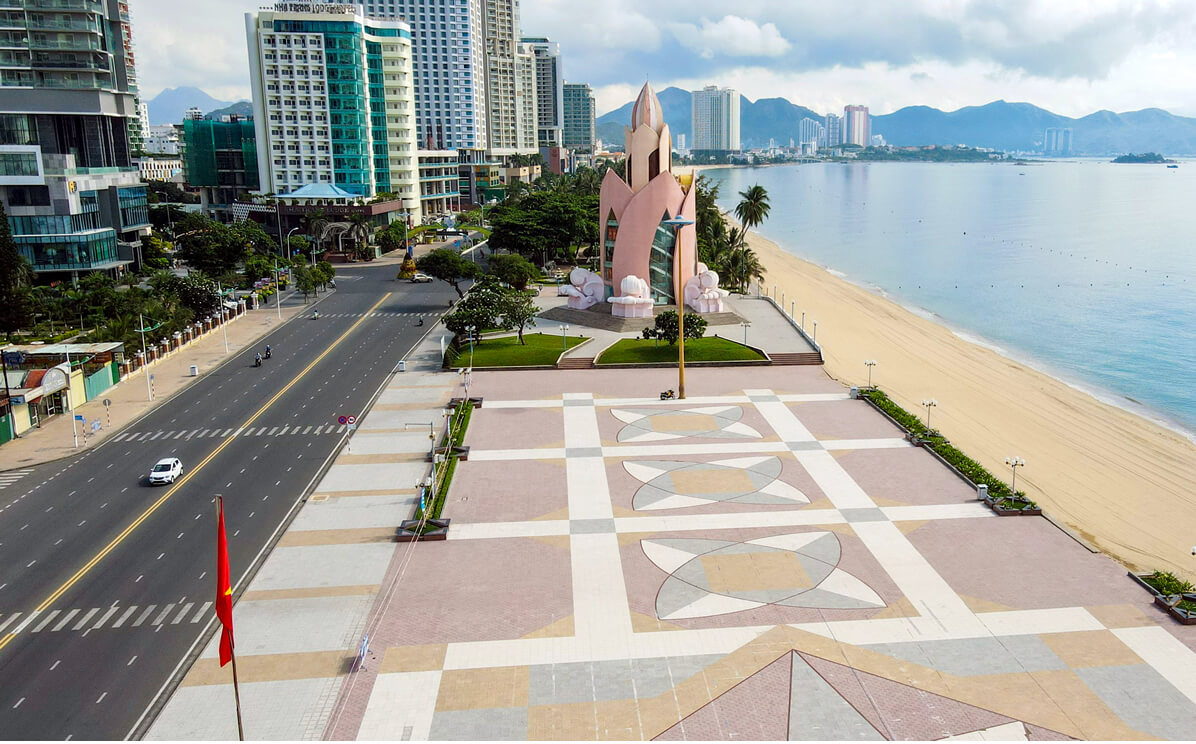 April 2 Square in front of the 12-kilolometer-long beach on Tran Phu Street is virtually deserted, contrary to crowded scenes during previous holidays. The central square, surrounded by luxury hotels and high-rise buildings, is one of the iconic spots in town. 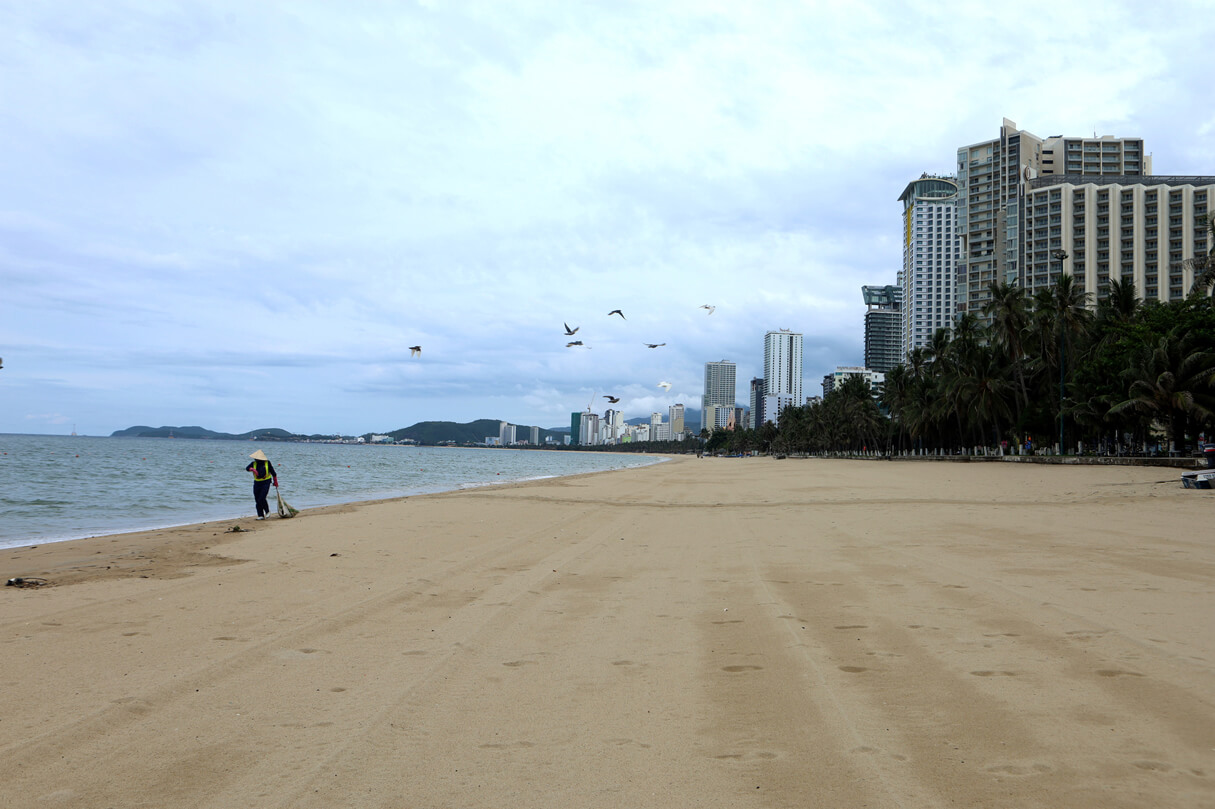 A sanitation worker cleans up the deserted coast along Tran Phu Street, a tourist hotspot among Chinese and Russians before the pandemic.
The beach is typically full of chairs and umbrellas provided by hotels for their guests.
Provincial authorities also ordered a swimming ban to curb the spread of the virus. A security guard is on duty on Yen Sao pedestrian street that hosts the town’s largest night market to prevent people from gathering here.
Opposite April 2 Square, the night market, usually crowded with tourists due to its proximity to the coast, has been closed since early May after Vietnam encountered its fourth coronavirus wave. 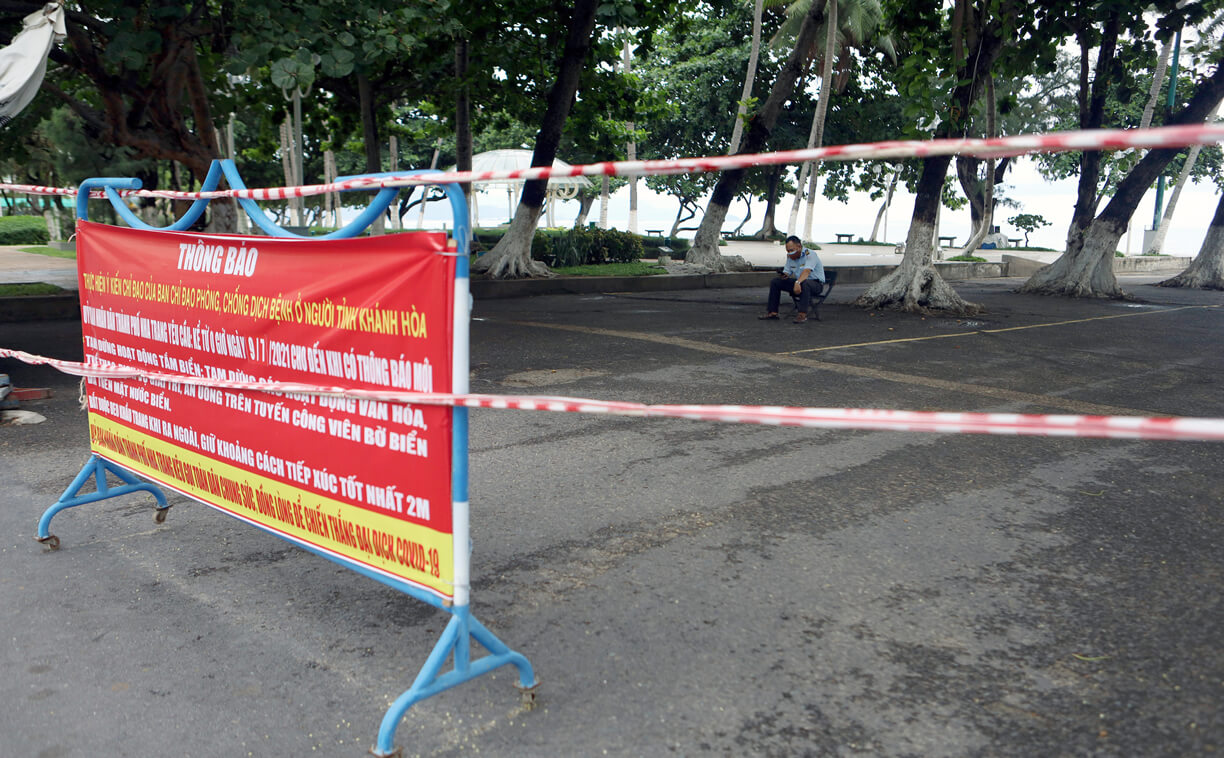 A checkpoint was put up to prevent people from entering a park by the beach. Parking lots, restaurants, and shops across the area have suspended operations. 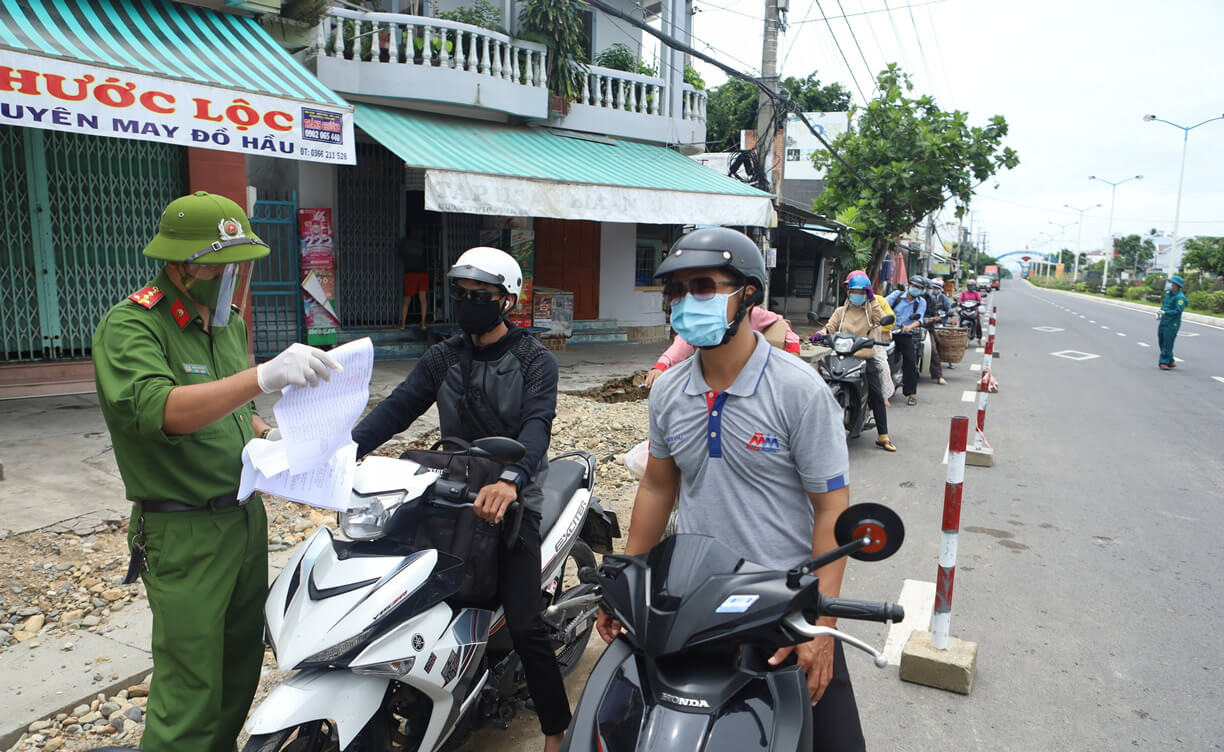 A police officer checks the papers of residents on October 23 Street, a gateway to downtown Nha Trang. To be eligible to enter, all are required to furnish a Covid-negative certificate as part of tougher measures to prevent the spread of the virus. 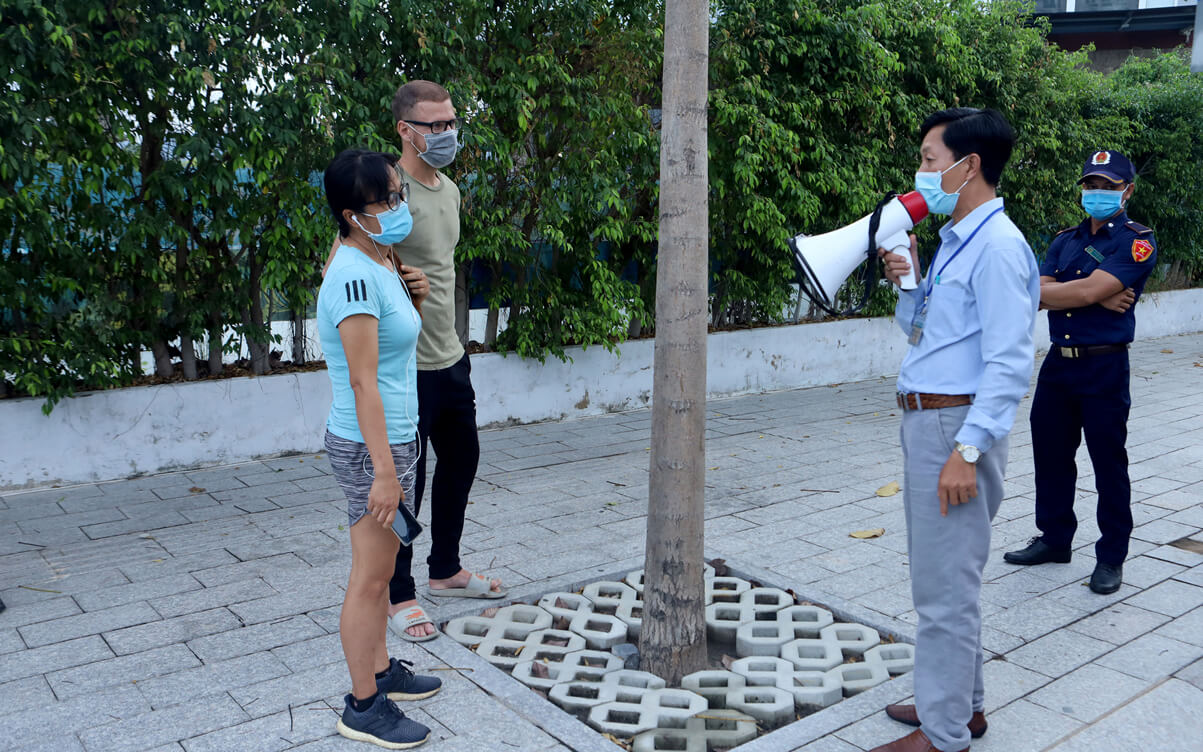 A foreigner and a Vietnamese woman who ventured out to exercise are stopped by functional forces after leaving their homes for non-essential reasons. Under current regulations, those violating social distancing measures would be fined VND1-3 million ($43.38-130.15). 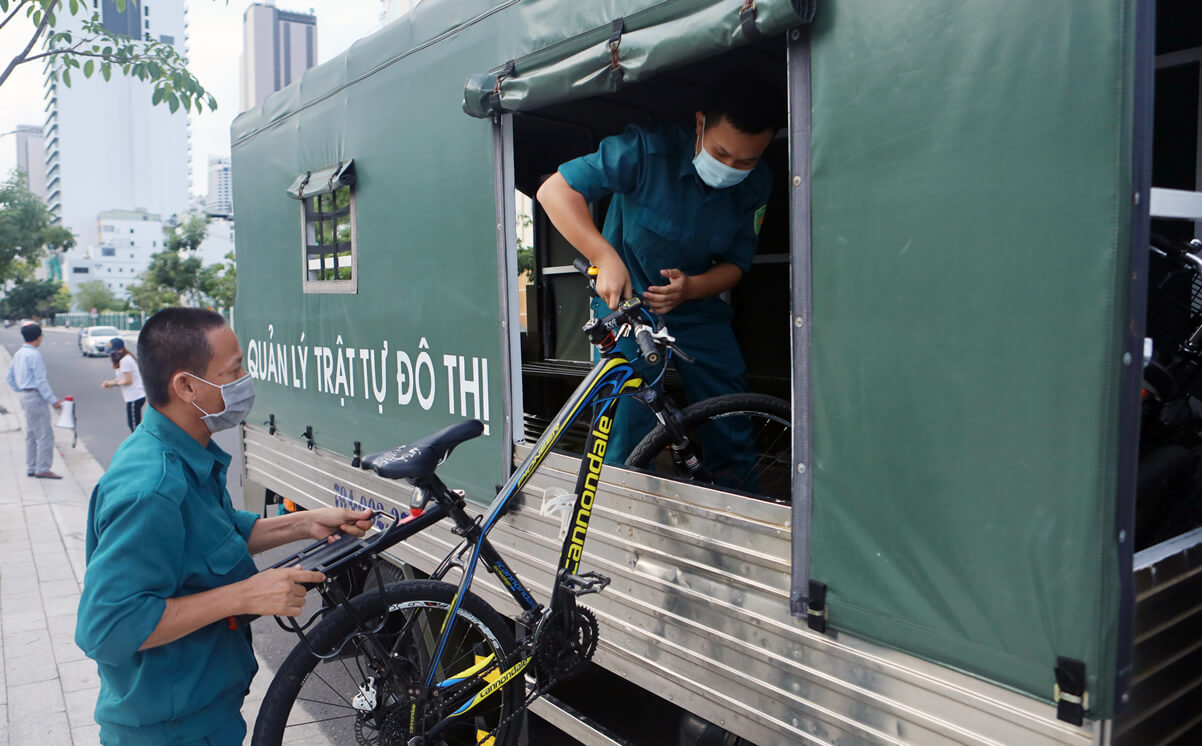 On Nguyen Thien Thuat Street, patrolling officers seize a bicycle.
Over the past week, Nha Trang authorities fined more than 200 social distancing violators for failing to wear masks and going out unnecessarily with a total VND220 million. 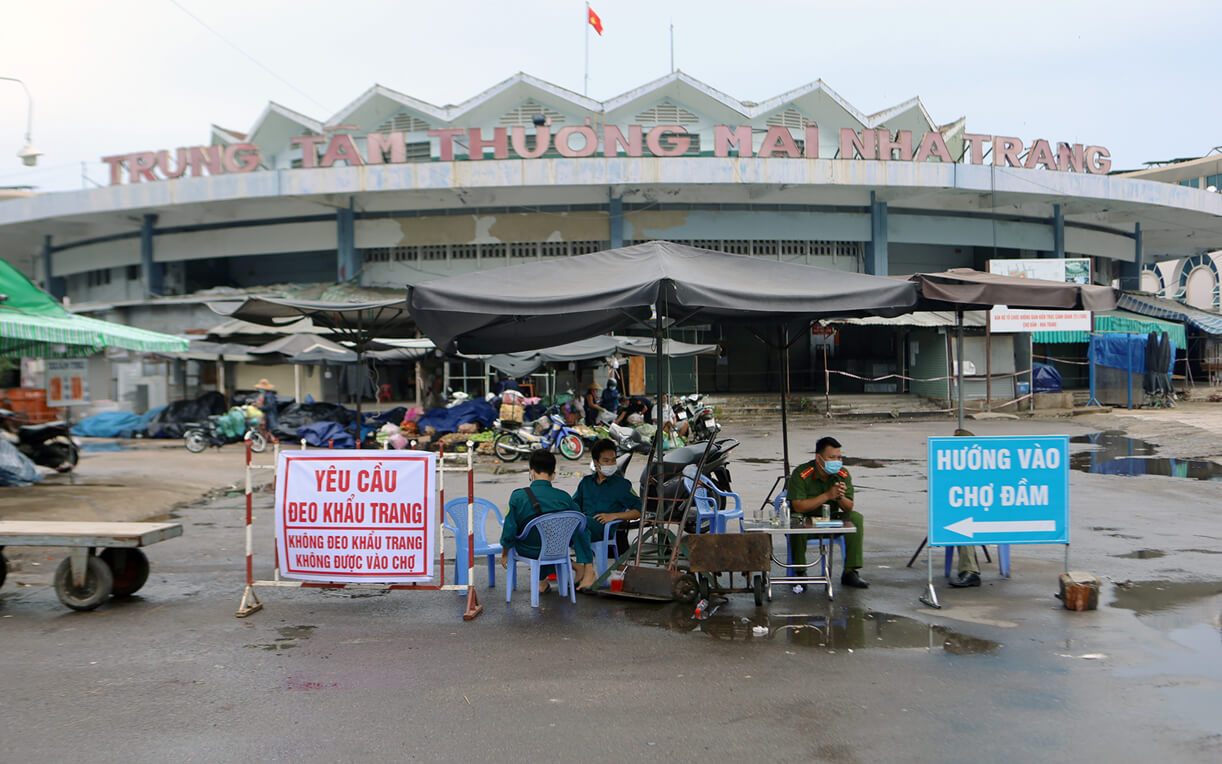 Local authorities have put up a barrier in front of Dam Market, home to an array of stalls.
Nha Trang has recorded 114 infections during the ongoing wave that hit the country on April 27. 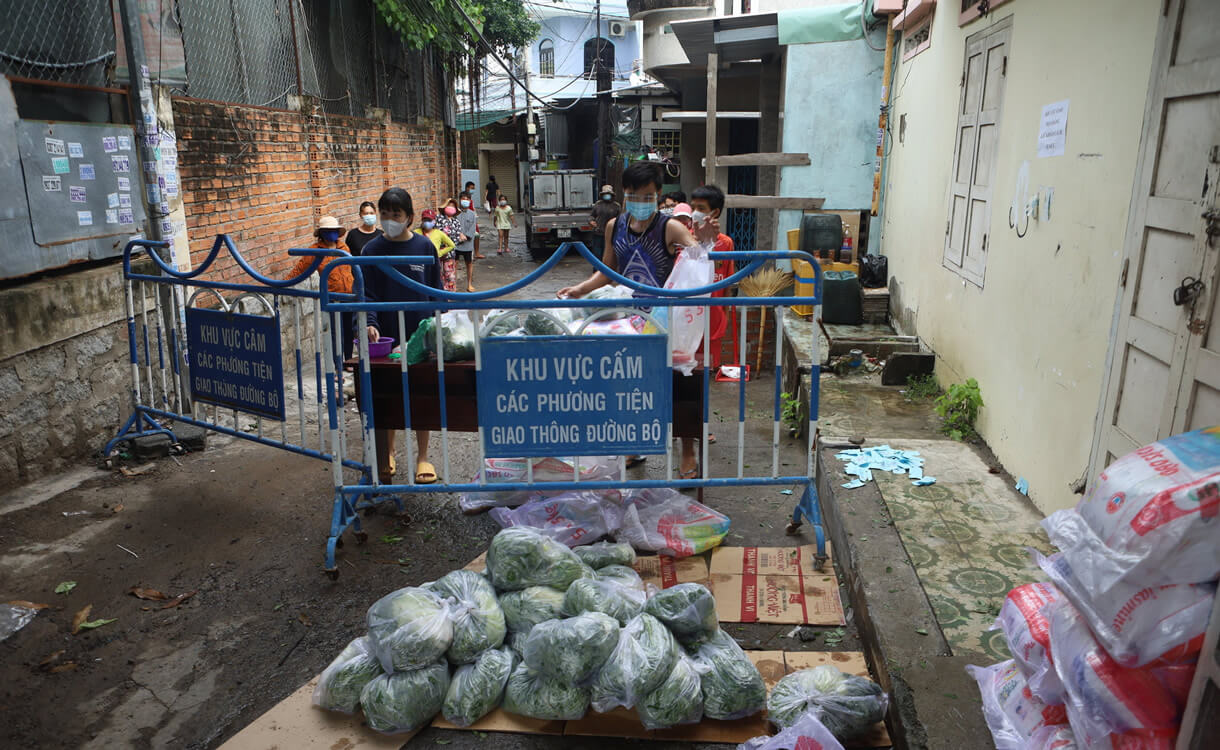 At a locked down area in Vinh Phuoc Ward, people receive necessities provided by local authorities. The town has 38 blockades related to infections in nine wards and three communes with a total of over 15,600 people. 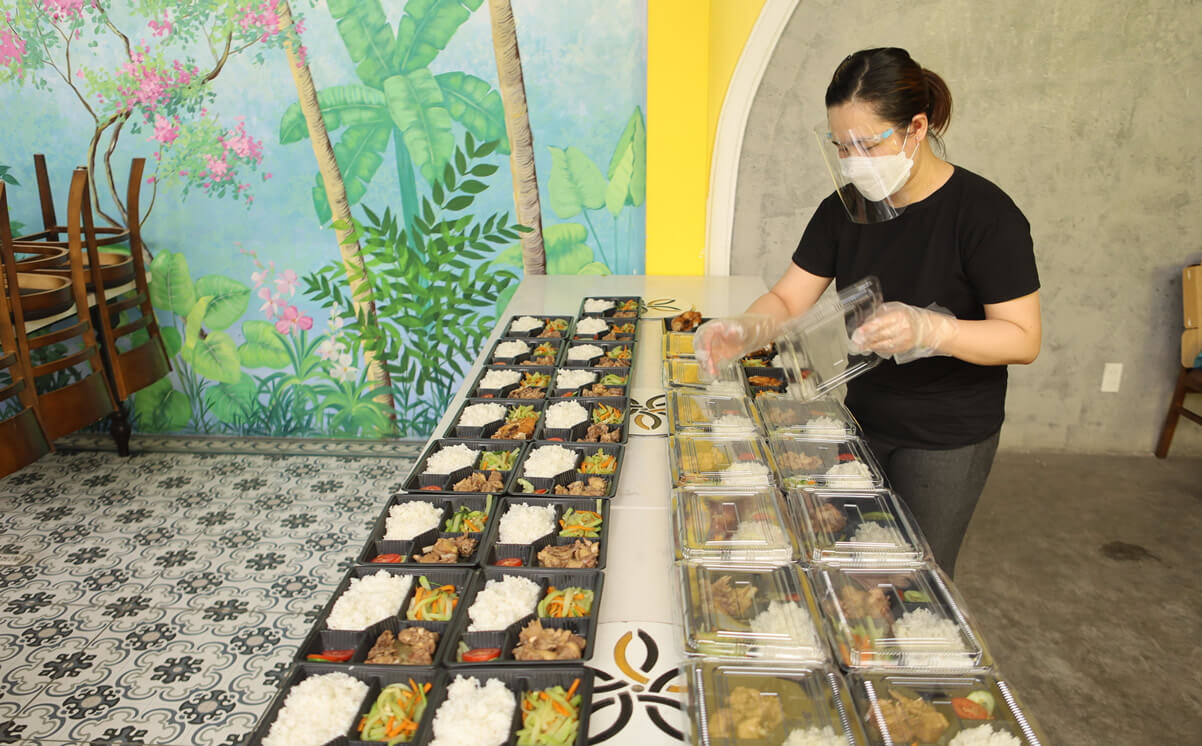 An employee of Hoa Su restaurant on Phan Chu Trinh Street prepares meals to support medical staff.
The new Covid wave has taken a heavy toll on the local tourism industry, which has been the mainstay for Khanh Hoa’s economy for years. Since the pandemic broke out, 95 percent of hotels in Nha Trang have closed down, with the remainder mostly operating as temporary Covid-19 quarantine facilities.
By Xuan Ngoc
Posted at 2021 Jul 20 10:16

The market, the biggest festival of the northwestern mountain tribes, is expected to attract more tourists after the Covid-19 pandemic.

Hoi An Town in central Vietnam is eighth on this year’s annual list of 10 cheapest tourist destinations in the world.