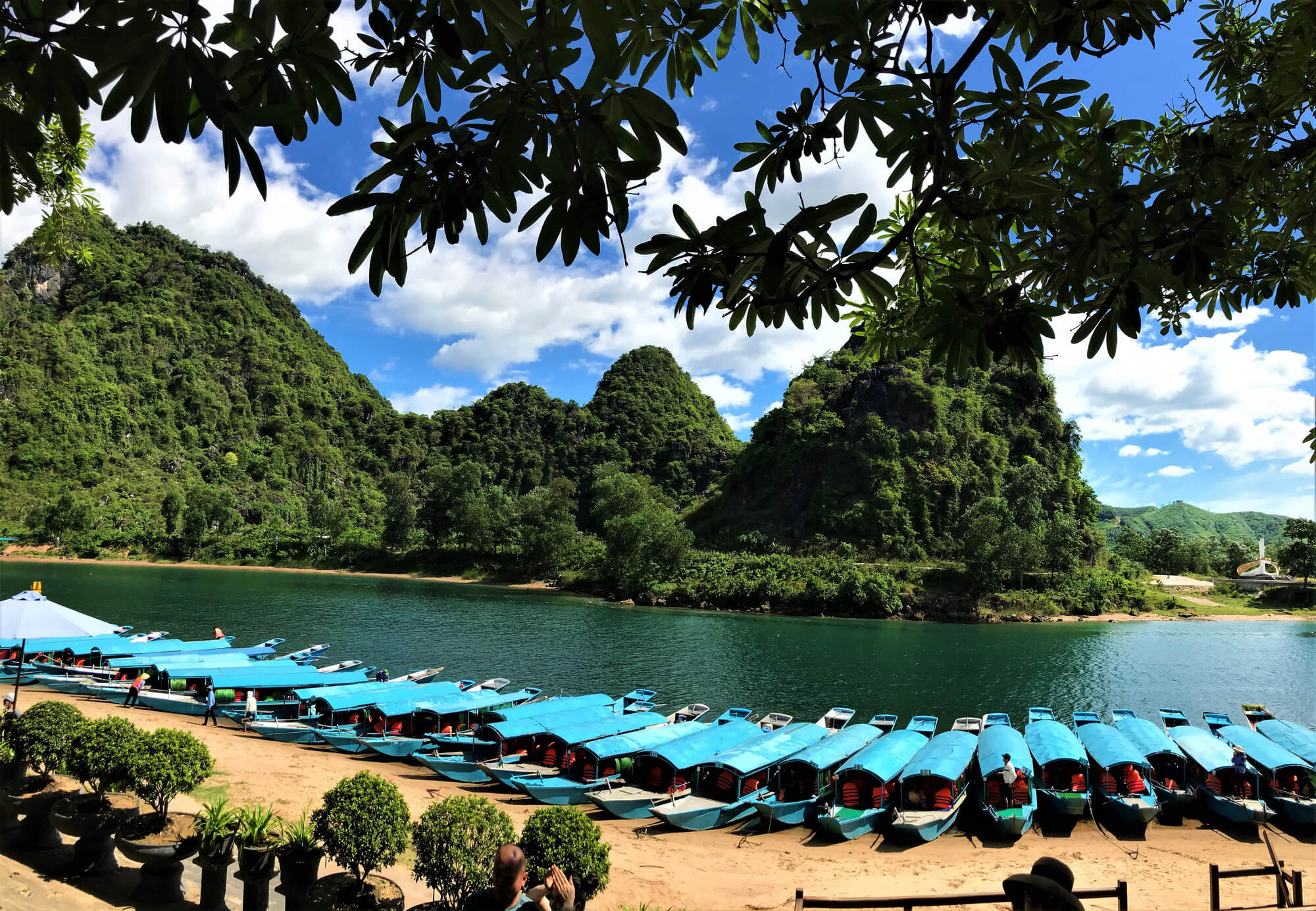 The north-central, coastal Vietnamese province of Quang Binh offers spectacles of all kinds — from mountains, oceans, and rivers to mysterious caverns — to those who seek an escape from the bustling city life.
Besides the prevalent options for planes and sleeper buses, tourists from Hanoi may consider taking a train ride to Quang Binh to savor a more laid-back experience.
For first-timers, Quang Binh strikes the first impression as an idyllic, nonchalant township, which helps its case as a getaway destination for big-city dwellers.
Residents of the locale are known for their warmth and amiable demeanor. Their hospitality is considered to be second to none.
Dong Hoi, the capital city of Quang Binh, offers a multitude of seafood restaurants. A consecution of seafood vendors can be found on the sidewalk of Nguyen Du Street.
Their unpretentious setup works in the diner’s advantage, helping them revel in the night air and moonlit ambiance near the Nhat Le coastline.
Quang Binh Province is endowed with spectacles of all kinds: mountains, oceans, rivers, and caverns, the diversity of which is enough to accommodate every calling to adventure of visitors.
Chay River and Nuoc Moc Spring are the best representatives of the riverine category in Quang Binh's tourism repertoire.
Both places don a hypnotic cerulean shade of blue, setting the scene for a multitude of rousing endeavors: kayaking, ziplining, and diving into the ten meters deep of water.
The heart of Quang Binh tourism lies at the thrilling expeditions into its famed cave systems.
Cave expeditions in Quang Binh range in a wide spectrum of difficulty, from the easiest explorations to be made at Phong Nha Cave or Thien Duong Cave to the hardest ones offered at En Cave, Va Cave, Tu Lan Cave, and Son Doong Cave — the world's largest known natural cave.
It takes 25 minutes on a motorboat to travel from the boat port to the cave entrance, which brings about an instant chilling sensation in the spine of tourists as the temperature abruptly drops and bats' eyes flash in the dark against the least amount of artificial light in their biome.
At this point, boat drivers are obliged to turn off their engine and start to row so as to not impede the habitat inside of the cave.
The rationale of this decision is made clear for visitors once they have entered the stalactite section of this cave, where icicle-shaped formations calcified through thousands of years correspond to the material of one’s wildest imagination. 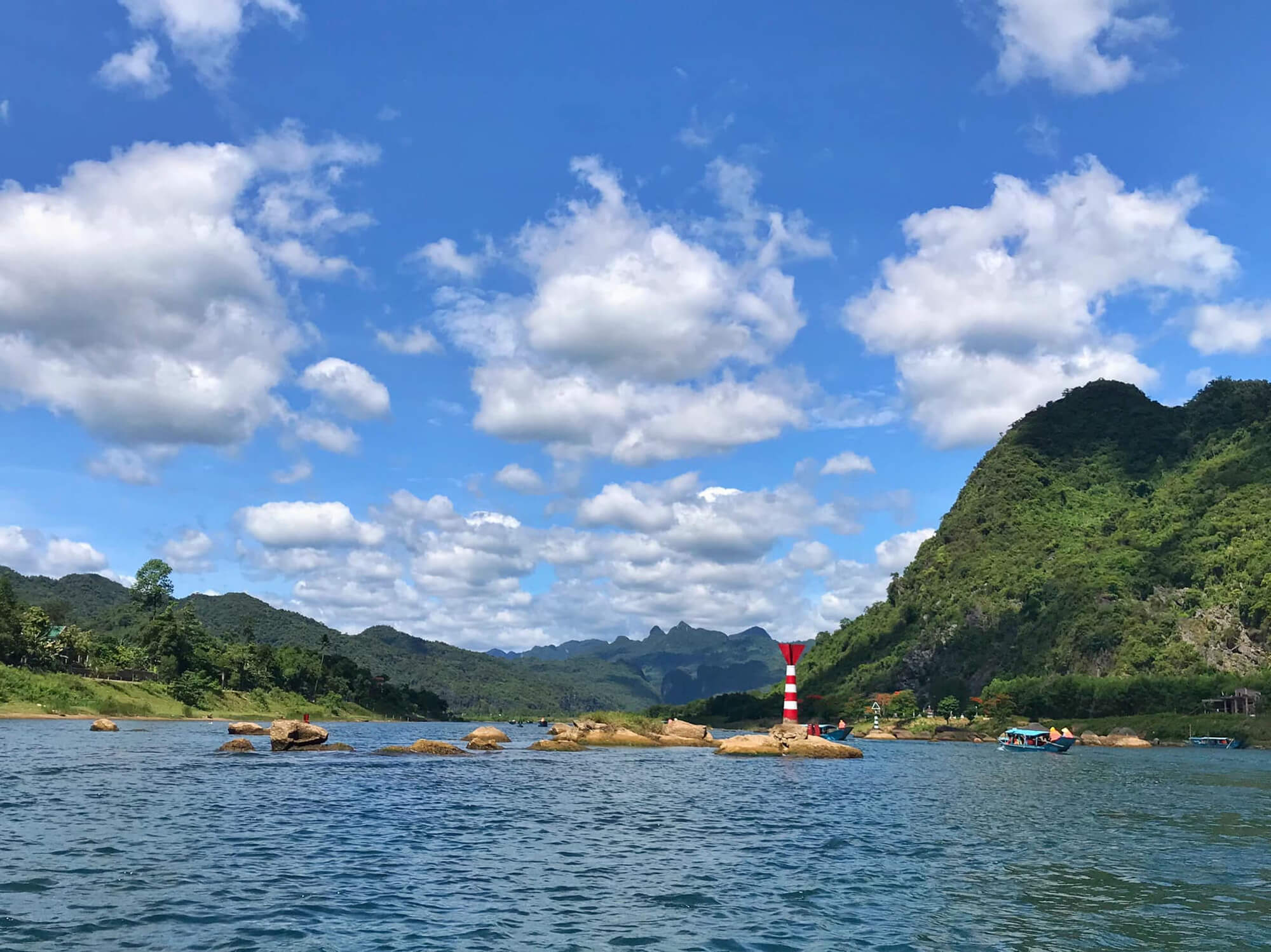 The cruise through the bizarre manifestation of natural forces lasts for about a kilometer before leading visitors up to a dry cave.
After disembarking from the boat, visitors would walk to the cave exit while still being able to spot stalactite caricature on the way out.
A perfect blend of idyll and mystery, Quang Binh unfolds itself to a different facet and consistently surprises tourists via each chapter of experience it offers.
Nguyen Thi Binh / Tuoi Tre News
Posted at 2020 Oct 21 09:35