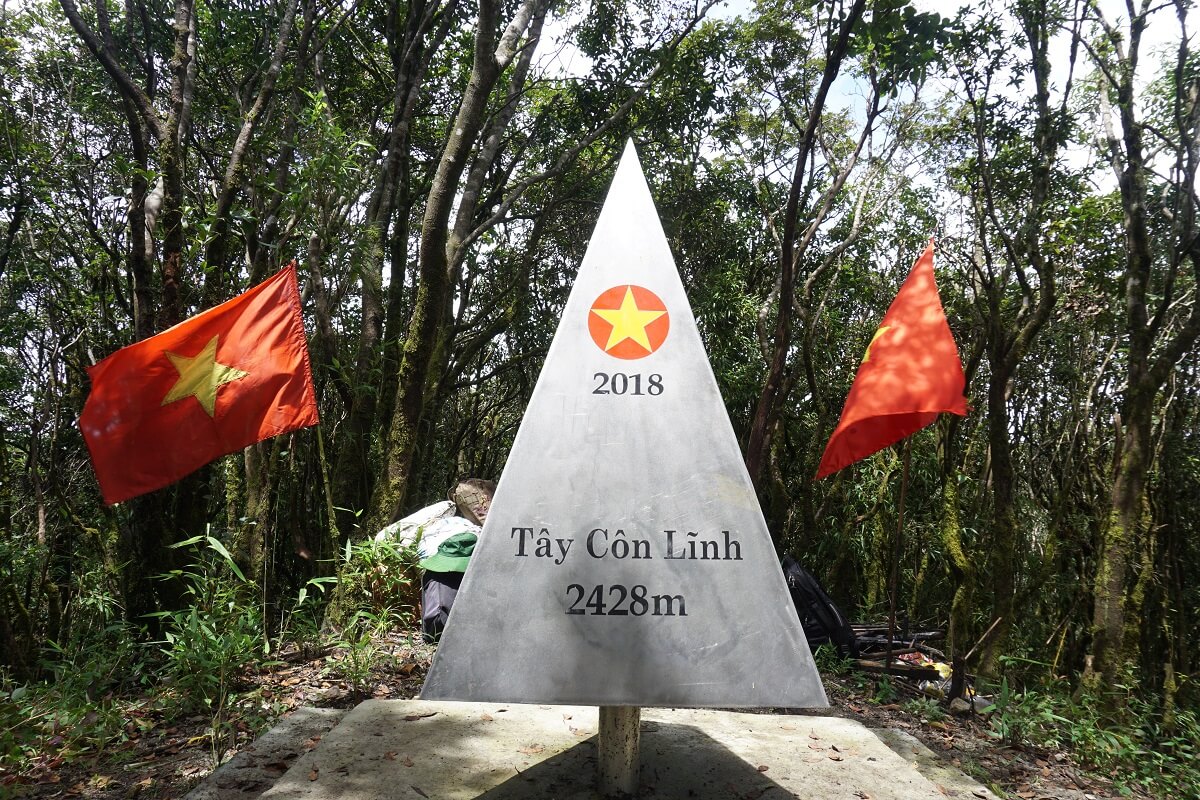 Tay Con Linh is situated along the Chay River mountain range. Straddling Hoang Su Phi and Vi Xuyen districts, its peak lies 46 km from Ha Giang Town, the eponymous province's capital. The mountain boasts an altitude of 2,428 m and is considered sacred by the La Chi ethnic community.
My guide Trieu Menh Kinh is a native red Dao from Thong Nguyen Village. He has eight years of experience in community-based tourism, allowing him to skillfully shepherd any trekker across Ha Giang.
At 9 a.m on an early September morning, our crew departed Kinh’s home, following the cement road from Nam Hong Village to the mountain base. Since it was harvest season, we were blessed with a tranquil painting of golden rice terraces rising into the sky, blue crisscrossing streams, and peaceful Dao, Tay, and Nung homesteads.
The expedition started off on a rough note as we walked towards Nhung Village, with rocky and muddy paths soon replacing the smooth cement roads.
After lunch at Tung San Village, we continued our journey towards the mountain. The deeper we penetrated its surroundings, the more obstacles appeared, with bends becoming sharper and ever more twisting. I held my breath every time Kinh’s motorbike came a tad too close to the edge. We reached a H’mong lady’s home next to a bamboo forest, parked there, and commenced our ascent up Tay Con Linh. 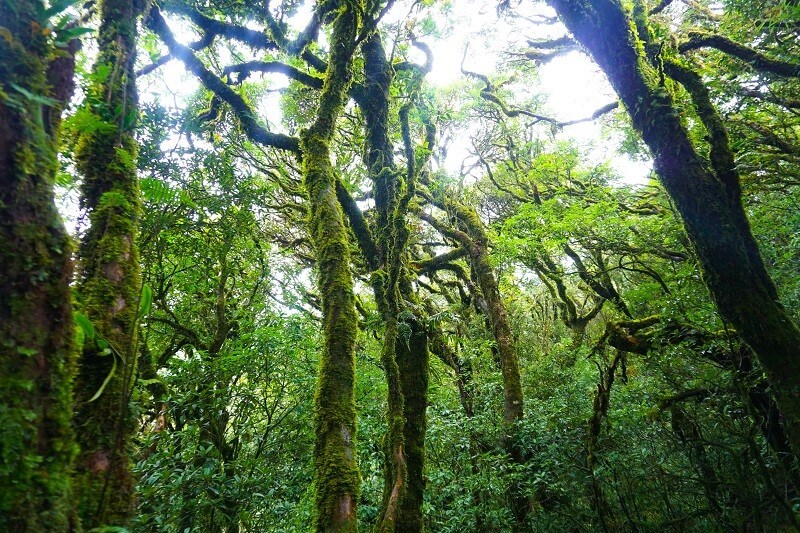 The first steps were not the easiest, Kinh led us along a stream bordered by slippery rocks. The road did not appear to be traveled often as a thick blanket of moss enveloped the rocks. And since I went there during flood season, water torrentially gushed down from above.
After the stream appeared a verdant garden of lanxangia tsaoko, a ginger-like plant used medicinally and in cooking. The burgundy fruit was in season and gathered neatly at the root. The plants grew wildly and in every direction that even our guide had to make notes while we navigated the maze-like garden.
The more we ventured into the bushy expanse, the steeper the slope became. Centuries-old trees flanked our path to add a sense of enchantment to the forest.
Out of nowhere, a thick branch suddenly snapped off from a tree and landed on the ground, disturbing the eerie quiet of the woods. Chills ran through my spine as I quickly scanned the crew to confirm everyone was fine. To my relief, we made it safely through the dangerous passage.
Continuing our progress, we noticed rows of illegally axed Po Mu and Ngoc Am trunks lying nearby. Since their wood is precious, rare, and in constant demand, many sneak into the forest to profit from their riches. On our way, I also caught sight of bowls and plates left behind by those who had come before us. Their rusty color further emphasized the abandoned feel of the woods, as if neglected for eons.
At last, after a day's trek, we crossed a narrow bridge to reach a shanty at an altitude of 1,848 m. The structure was initially erected as a rest stop by H’Mong locals who frequently visited the forest. In time, Kinh had made a deal with its owners to provide accommodation for tourists, equipping the shanty with thick blankets, bowls, and cutlery.
At 5 p.m, the crew was completely drained following a long hard day of trekking. As one, we took advantage of the nearby stream to wash off our accumulated sweat and dirt. Though the water was glacially cold, I had little choice but to pour a bucketful over my head.
Passing an ancient tree, a crew member reported what seemed to be a poisonous snake whose head he saw peeked out of the trunk.
During the rainy season, snakes appear in greater abundance along the route, making the presence of an experienced guide even more vital. To avoid incident, three red Dao men set out to kill the snake, returning half an hour later carrying the burly black and white ophidian whose fangs had been ripped out. We did not want to kill animals in nature, but we had no choice to avoid danger.
That evening, we feasted on forest vegetables, frogs gathered near the river, and snake meat.
Warmed by the cozy fire, we sipped on traditional goat wine to celebrate the end of an eventful day.
The next morning, we woke up to the pleasant rustling sounds of the nearby stream and cheerful chirping of birds. I walked outside the shanty and was greeted by thick opaque fog, another day had started. We fueled ourselves with hearty bowls of noodles and rice before resuming the second day of our Tay Con Linh expedition.
At 7.30 a.m, the crew began its trek. Kinh told us the trip from our shanty to the summit would take two to three hours depending on our pace.
Our second day trek was enveloped in heavy fog. Surrounding us were oak trees blanketed in moss. The higher we reached, the rootier trees became, making it harder to walk and orient ourselves. For a brief instant, I thought I had entered another dimension.
From time to time, Kinh would hit out at snakes found along the way.
Blending in with ancient towering trees were centuries-old tea plants from which white blooms fell to cover the forest floor. Amongst the white flowers were ngoc cau, a rare species of burgundy mushrooms only found at an altitude upwards of 2,000 m. They are commonly used to brew medicinal wine beneficial for tendons and bones.
As we neared the top, both the temperature and air pressure dropped. I gasped for air and dragged my feet through the woody passages, feeling my energy drain by the second. Kinh informed the crew the altitude to be 2,400 m and that the summit was merely 28 m away.
Empowered by this encouraging news, the crew picked up its pace to finally reach the top of Tay Con Linh where we were met with a jaw-dropping summit view.
We ended our trip via another route descending from the top, pretty flowers of all shades proclaiming our victory. 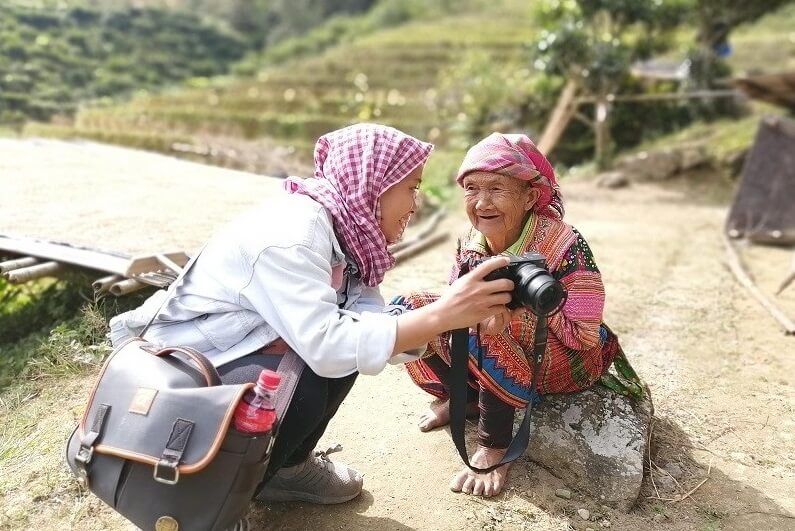 Before traveling:
Transportation:
Limousine bus: Since the route is less frequented, there are not as many shuttle buses that run through the region. If departing from Hanoi, you can consult Ngoc Cuong, Cau Me, Quang Nghi, Quang Giang, or Dang Quang bus services for a ride to the Tan Quang intersection in Ha Giang Province. From here, you can hop on a second ride to reach Thong Nguyen Village. The latter is offered by Thong Nguyen bus service that can be reached by this number: 0966 212 213. However, motorbikes are the only transportation available from Hoang Su Phi to Tay Con Linh Mountain.
Motorbike: If you are feeling more adventurous, you can travel by motorbike from Hanoi to Tay Con Linh mountain base directly. However, this option is not recommended since mountain passes can get dangerous with sharp turns and uneven surfaces, especially for first-timers unfamiliar with the route. It is best to book a knowledgeable guide who will drive you by motorbike to Tay Con Linh.
Accommodation: Stay at Kinh Homestay, Dao Homestay, or Hoang Su Phi Bungalow when in Hoang Su Phi District. During your trek, you will spend the night in a H’mong shanty at an altitude of 1,848 m (fees included in the tour).
Food: Mainly homemade meals of specialties including prairie chicken, wild boar, forest vegetables, goat rice wine, and corn wine.
Porter: Despite being dubbed the rooftop of the northeast, Tay Con Linh is not over-frequented. Due to its lack of tourists, the route can be maze-like and confusing. This is locally considered a spiritual landmark of the ethnic community with multiple accounts of mysterious disappearances. Thus, it is highly recommended to book a guide. Kinh is an experienced and devoted trekker and knows the route around Tay Con Linh like the back of his hand. For bookings, you can contact him via 0988 070 619.
Tour pricing: The tour costs VND1.3 million ($56) if you depart from Nam Hong Village and VND4 million from Hanoi. The fee includes food, accommodation, motorbike rental, and a guide. The minimum number of people on a crew starts at four and cuts off at 16.
Ideal time to visit: The most ideal time to climb Tay Con Linh is in the dry season that begins at the end of September and ends in April. You can thoroughly enjoy golden terraced fields in the fall, water season in April, or blooming red azaleas at the start of spring. You should avoid visiting from May to September during flood season when snakes are abundant.
Mountain-climbing gear: Whilst Tay Con Linh is not that tall, its paths are rocky and bendy. Make sure you bring appropriate gear like trekking poles, a flashlight, waterproof backpack, boots or suitable shoes to prevent dangerous snake bites, gloves, and a wide-brimmed hat. At such an altitude, Tay Con Linh can also get cold quickly so pack sufficient and appropriate garments.
*Xu Kien, 28, is from the central province of Quang Ngai and lives in Ho Chi Minh City. She travels around Vietnam and writes books and a travel blog.
Posted at 2020 Sep 06 09:07
Go back