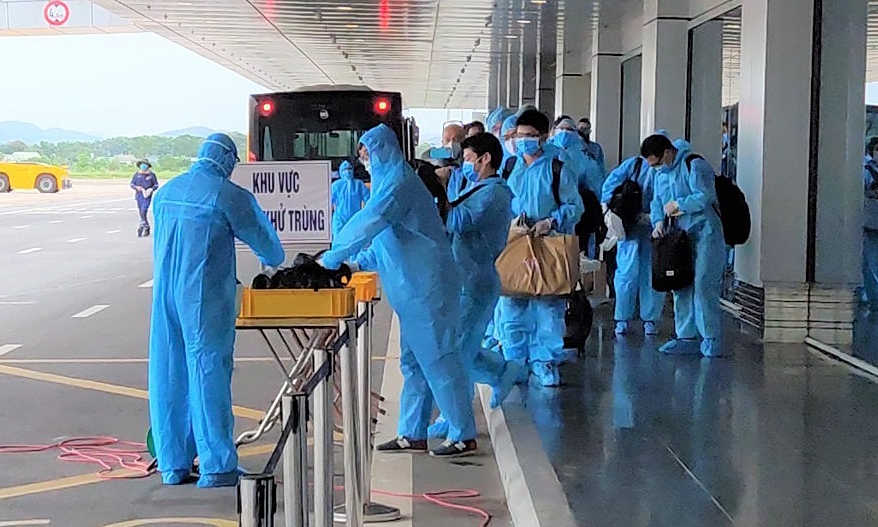 The Vietnam Airlines fight VN311, organized with support from the Japan Chamber of Commerce and Industry (JCCI) in Vietnam, landed at the Van Don Airport in Quang Ninh Province at around 2 p.m.
An airport representative said they expect two more flights from Japan this week, carrying around 300 more Japanese experts.
All 150 experts arriving Thursday wore protective suits and informed authorities of their medical status upon entry. Their body temperatures were scanned and their luggage was sanitized. They will be quarantined for the next 14 days per existing Covid-19 prevention protocol.
Japanese Foreign Minister Toshimitsu Motegi said Tuesday that Japan would partially ease travel restrictions to Vietnam, with flights between the two countries permitted from June 25-27, Reuters reported.
Vietnam's Ministry of Foreign Affairs had said last week that an agreement has been reached with Japan to gradually relax travel restrictions between the two countries. Vietnam has been in talks with China, Japan, South Korea and some other countries and territories on gradually recommencing travel, first for experts, managers and skilled workers.
Vietnam banned entry of foreign nationals and suspended international flights in late March. But it has been receiving special flights which repatriated Vietnamese citizens from around the world and carried foreign experts and workers needed in major economic projects.
Many of these flights ended up in Van Don, which is not far from Hanoi. Since February, the Van Don Airport has served 31 flights carrying around 5,000 foreign experts, including those South Korea, Japan and Taiwan, either from and to Vietnam. The airport has also received 37 repatriation flights to bring home around 6,100 Vietnamese.
Japan meanwhile has an entry ban in place for 111 countries and territories to prevent the spread of the novel coronavirus.
Japan was Vietnam's fourth largest investor in 2019 after South Korea, Hong Kong and Singapore in terms of registered capital, and its largest labor market, welcoming around 80,000 Vietnamese last year.
As of Thursday, Japan had recorded over 18,000 coronavirus cases and nearly 1,000 deaths. Vietnam has confirmed 352 cases, with just 23 remaining active. There has been no Covid-19 death in the country.
Posted at 2020 Jun 26 12:13
Go back