NDO - Many locales in the Central Highlands have worked to preserve and keep their tribes’ traditional cultural practices alive, thus contributing to promoting solidarity in the community and nurturing love and pride in their ancestors’ valuable heritage amongst the younger generations. 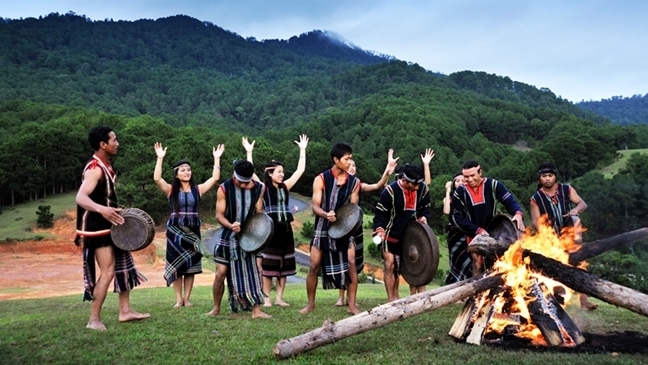 As a Co Ho ethnic man who is enthusiastic about traditional culture, musician Krajan Plin and his friends established a musical band 20 years ago with a hope to popularise the folklore melodies of their ethnic group within the public. From the band, many musical talents have risen as stars including Uyen Ly, Cil Glè, Krajan Ut, and Cil Poi.
Krajan Plin is the mentor of Bonuer Trinh, the first prize winner of a singing contest hosted by Ho Chi Minh City Television.
Plin has also inspired the love for traditional value to his nephew, Krajan, who was deputy head of the Lam Dong provincial art troupe.
Krajan said that each ethnic group in the Central Highlands has its own cultural characteristic, and they are proud of this. However, he admitted that the cultural essence has faded away in modern life. Therefore, he wants to share a helping hand to preserve and protect the treasured cultural heritage of the ancestors.
Krajan and his villagers have collected traditional musical notations and tunes for gong performances and folklore songs, and have introduced them to the community through public performances, art exchanges, and social media.
As a relative of Plin and Krajan, gong performer Cil Ka has joined the effort with her descendants in safeguarding traditional melodies by teaching young women in the community to play gongs and sing folk songs.
K’Diep is an accredited patriarch in Tam Bo commune, Di Linh district, Lam Dong province. Once working at the Lam Dong Provincial Radio Television, K’Diep has travelled a lot and met many people, which helps him appreciate greatly the languages, costumes, rituals, festivals, folk songs and dances of ethnic groups in the Central Highlands region.
He has also witnessed the truth that many local youngsters have shown less interest in traditional culture as they can’t even communicate or sing folk songs in their mother tongue.
In 2010, K’Diep joined the editorial board of the ‘Teaching and learning Co Ho ethnic language’ textbook, which helps people learn more about the language of an ethnic group which has a high percentage of the population in Lam Dong province.
He has been also invited to deliver talks and speeches about traditional culture at schools inside and outside the commune.
Over the past decade, a total of nine free classes teaching gong playing have been established in Di Linh district thanks to the joint support of local authorities, cultural sector, elders and gong artisans. The classes have welcomed nearly 220 attendants, who are taught to play gongs and learn more about the message of traditional gong performances.
Encouragingly, similar classes have also been opened in many other districts in Lam Dong, including Lam Ha, Cat Tien, Da Huoai, Bao Lam, Don Duong and Dam Rong, seeing the enthusiastic participation of local youngsters.
Thanks to the joint effort of local elders, artists, artisans and cultural enthusiasts, the traditional musical space of the gong in the Central Highlands has been well preserved, folklore melodies have been sung cheerfully, the indigenous language is being regularly practiced in daily life, and youngsters’ sense of responsibility in safeguarding traditional cultural heritage has been increased.
Posted at 2020 Jul 08 08:26
Go back