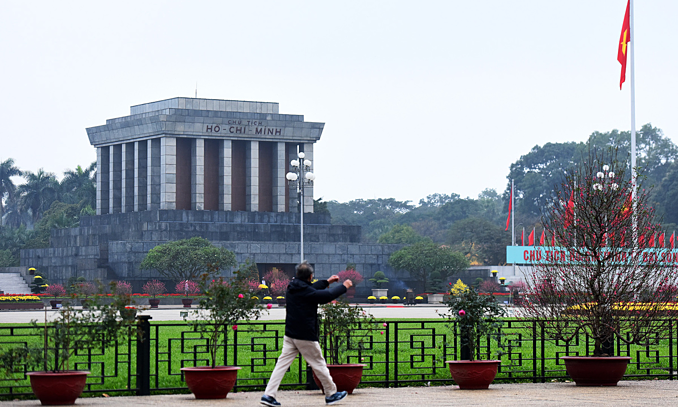 Work is expected to take two months, with re-opening planned for August 15, according to its management board. During repairs, all visits will be suspended.
Situated at No. 2 Hung Vuong Street in Ba Dinh District, the mausoleum is normally open to the public from 7.30 a.m. to 10.30 a.m., except on Mondays and Fridays.
As one of the top tourist destinations in Vietnam, the site reopened since mid-May after two months of closure as a preventive measure to avoid large gatherings and contain the spread of the Covid-19 pandemic.
Opened in 1973, the granite memorial was inspired by Lenin's mausoleum in Moscow and built on the spot where President Ho Chi Minh read the Declaration of Independence on September 2, 1945, establishing the Democratic Republic of Vietnam. The embalmed body of President Ho Chi Minh is preserved in the central hall inside the building, protected by a military honor guard.
A group of scientists, including four Russian experts and seven Vietnamese who last year examined President Ho Chi Minh’s embalmed body at his mausoleum, said it was in "excellent condition."
Vietnam is among several countries who have embalmed their leaders’ bodies, including Russia, China, and North Korea. The founder of the Soviet State, Vladimir Lenin, was embalmed and placed in Moscow Mausoleum during 1924, according to the museum's website.
Millions of people visit the Hanoi memorial each year, making it one of the capital’s most popular attractions.
Vietnam eased its social distancing measures on April 23 with all local tourist destinations reopened, though the country remains closed to foreign entry except for special cases to contain the pandemic.
Hanoi welcomed 4.13 million visitors in the first five months of this year, down 65 percent from 2019. Of these, 961,000 were foreigners, falling by 65 percent year-on-year, according to official statistics.
Posted at 2020 Jun 15 09:27
Go back