NDO/VNA - The main activities within the 11th Hue Festival, which will be held from August 28 to September 2, were announced by the festival’s organising board on June 12. 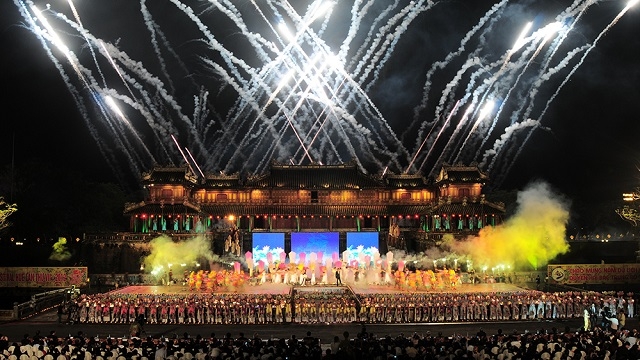 An artistic programme will kick-start the festival at 8 pm on August 28 at Ngo Mon Square, honouring the traditional and contemporary cultural values of the central province of Thua Thien-Hue and other regions of Vietnam.
A street carnival will be held every day at 4.30 pm from August 29 to September 2 honouring the national dress of various ASEAN countries through costume performances and dances.
A food festival will also be held on those days at Thuong Bac Park, serving famous local dishes.
A music programme featuring famous songs and the great musician Trinh Cong Son will be held at 8 pm on August 30.
Another arts programme will take place at 8 pm on August 31, featuring the Huong (Perfume) River, which runs through Hue, while leading DJs in Vietnam and the region will keep electronic music lovers entertained on the evening on September 1.
The closing ceremony will be at 8 pm on September 2, together with an “Ao dai” performance.
The biennial festival was initially slated for April 1-6 but was postponed due to COVID-19.
The Hue Festival 2018 attracted nearly 1,400 artists and professional performers, including 388 from 24 international art troupes and nearly 1,000 from Vietnam.
Thousands of amateur artists also took part in the festival, which welcomed more than 1.2 million visitors.
Posted at 2020 Jul 10 13:03
Go back