Nghe An: landscape of mountains, rivers and legend

Sun-drenched and often windy Nghe An, a hidden gem in north-central Vietnam, offers tourists scenic landscapes and an exclusive taste for tea. 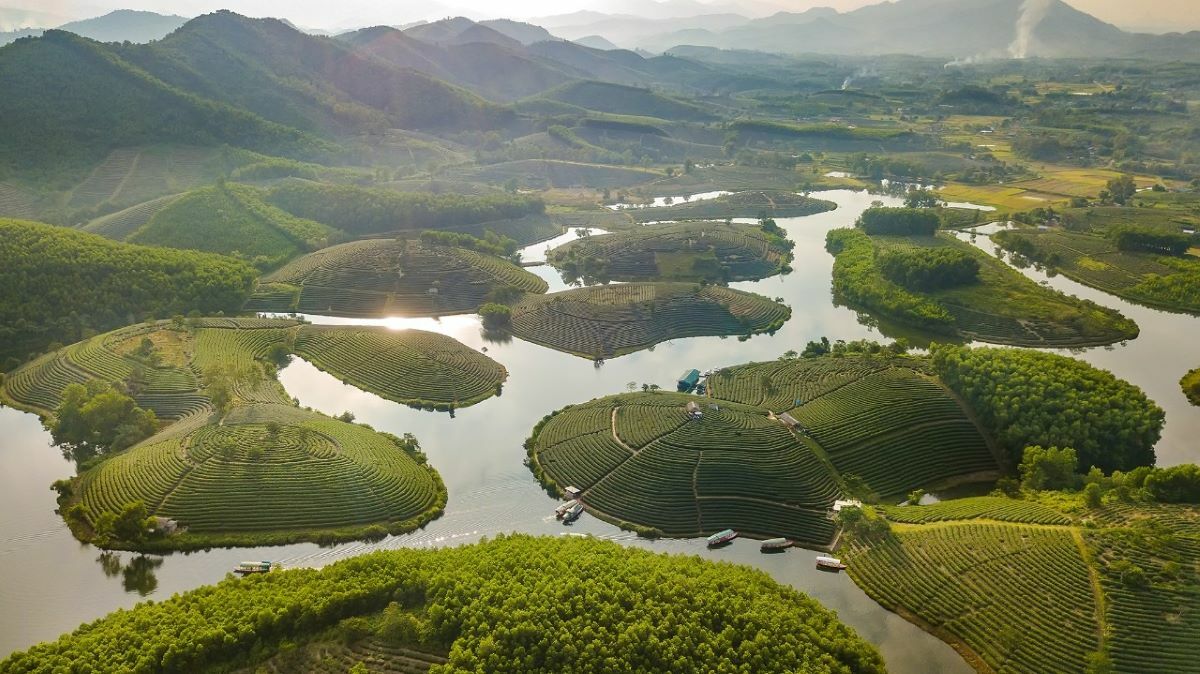 The largest province in Vietnam, Nghe An adjoins Thanh Hoa Province to the north, and Ha Tinh Province to the south, bordering Laos to the west and the ocean to the east.
Leaving Ninh Binh, the last province on my six-month journey across the north, at 7 a.m, my motorbike headed straight to the north-central region via smooth National Highway 1A.
At around 3 p.m, I turned at National Highway 36, then at National Highway 15 before reaching Thanh Chuong District, boasting over 300 tea islands, making it the most attractive destination in Nghe An Province.


At Gio Lao Eco Lodge, a Thai-ethnic inspired stilt house, I allowed my lungs to fill with the pristine local air as my gaze lingered over green tea islands surrounded by pearl-like bodies of water.
With over 420 hectares of tea estates, farmed by 180 households, most regional produce is exported exclusively to Japan.
Ngoc Anh Boat House, situated next to my lodge, operates tea cruises for VND40,000 ($1.7) per person, with an island dining service available at a small extra fee. Choosing to sleep on the boat will set you back a further VND200,000 ($8.5) per person a night.
After one night, as the lodge owner recommended, I continued west towards Con Cuong District, 60 km from Thanh Chuong. The route via National Highway 7 to the traditional Thai Quy Thoa Homestay in Mon Son Commune, Con Cuong District, proved simply majestic.
On my third day in Nghe An, I planned to penetrate deep into the jungle to find the ethnic Dan Lai Village.
Once upon a time, it is said, after a local committed a terrible crime, the king penalized the village, forcing its inhabitants to seek refuge in the dense forest where they slept upright to evade danger.
Nowadays, as the smallest ethnic minority in Nghe An, the Dan Lai reside solely in the mountains bordering Laos.
Though border guards are usually extra vigilant in granting access to Dan Lai Village, which lies in a "sensitive" area as it is a border area, I had no problem gaining permission after providing the necessary identification.
Driving along the wide mountain passes seemed easy at first. Standing at a corner, I could even see small boats pass on the Giang River. But my joy was shortlived as the road deteriorated. After several near-falls, I reached the village at noon.
The village lies sprawled along the river, crossed via a wooden suspension bridge beneath which local children swim to escape the heat.
With very few visitors to the region, most villagers, although adept at Vietnamese, avoided me and the border guard escorting me.
The following morning, I entered Con Cuong District's Thung Bung Cave, featuring mighty stalactites and an abysmal sinkhole at 3-meters in width, after contact with its manager.
After, I visited Khe Kem Waterfall, the largest waterfall in Nghe An, which the local ethnic Thai call Bo Bo Fall, meaning milky silk.
Passing through many local paddy fields during my last few days in Nghe An, I managed to reach mesmerizing crape myrtle forests, with trees reaching 35 metres in height and 70 centimetres in diameter.
I continued to Muong Long Commune and Muong Xen Town in Ky Son District, dotted with ethnic Mong communities near the Lao border, before reaching my final destination at Nam Can Border Gate. 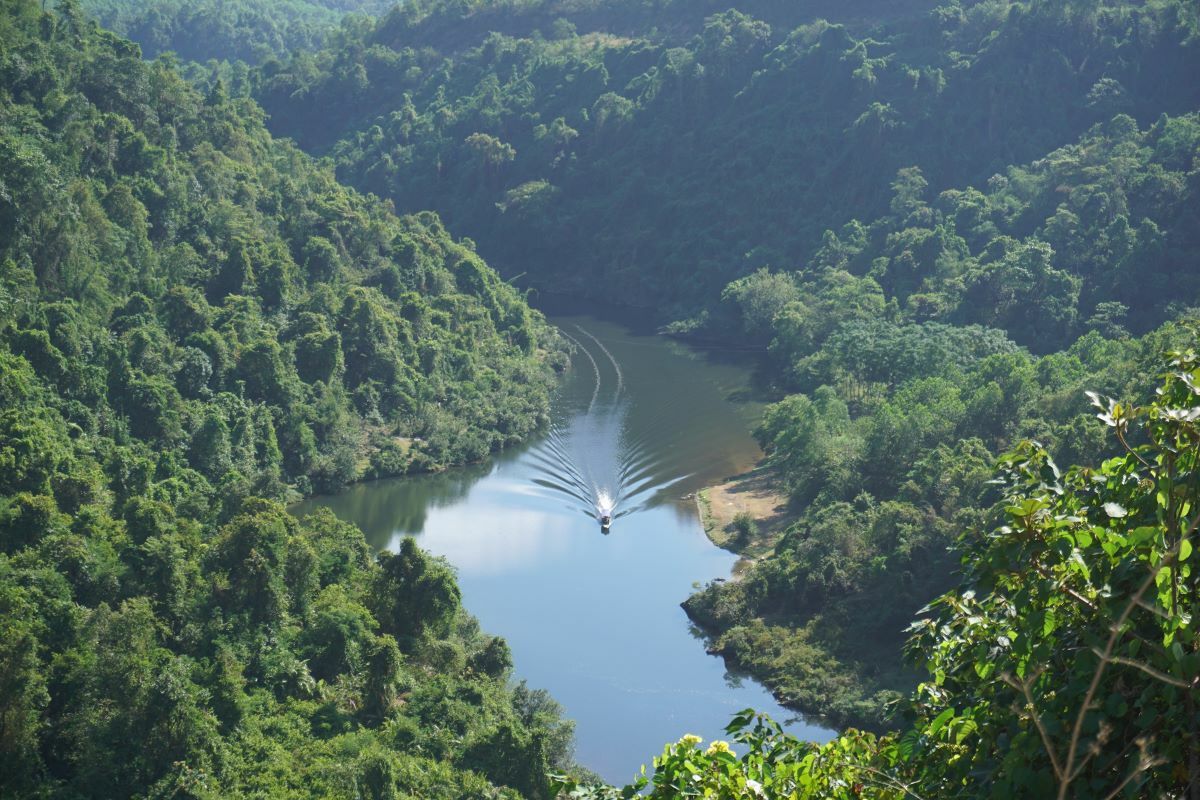 *Before traveling to Nghe An
Transport
Coach: There are many coaches from Hanoi to Nghe An. One of the best is operated by Duc Thinh Phat.
Air: Nghe An is most easily reached by air regardless you are in the north or the south via Vietjet Air, Vietnam Airlines, Bamboo Airways, serviced by Vinh Airport.
Motorbike: With the wide variety of local destinations, all backpackers should experience this route.
Lodging
There is a wide variety of homestays including Gio Lao Eco Lodge in Thanh Chuong District and Quy Thoa Homestay in Con Cuong District, priced at VND100,000 ($4.3) for lodging and VND150,000 ($6.4) to include lunch and dinner. Lodging grows scarce the closer you get to the border, with Phanh Dan Hotel priced at VND200,000 ($8.5) per night as one of the few options.
Eating
Due to the province’s favorable position (having both mountains and oceans), popular dishes include eel, water fern cakes, steamed rice rolls, baby clams with rice crackers, squid, and mountainous chicken.
Travel time
The ideal time to visit Nghe An is either March-April or November-December, with flowers blooming throughout the province. June and July are referred to as the Foehn-wind period, pushing the daily temperature up to 45 degree Celsius.
Alternative destinations or activities include Cua Lo Beach in Vinh Town, Ho Chi Minh Native Home Monument, Pha Lai Ecotourism Site, and a Giang River cruise.
*Xu Kien, 28, is from the central province of Quang Ngai and lives in Saigon. She travels around Vietnam and writes books and a travel blog.
Posted at 2020 Jun 22 12:02
Go back