A new cable car link over the sea with the world’s highest track rope opened Saturday in the port city of Hai Phong.

The cable car link, which traverses over 3,955 meters of sea connects Dong Bai Commune on Cat Hai Island and Phu Long Commune on Cat Ba Island in northern Vietnam.
The system, developed by Vietnamese conglomerate Sun Group at a total cost of VND2.21 trillion ($94.7 million), is expected to boost tourism in Cat Ba Island, home to Lan Ha Bay and ancient fishing villages.
The cable car link is supported by two pillars standing 214.8 meters tall each. This has been recognized by the Guinness Book of World Records as the highest such structure in the world.
The system has 60 cars capable of carrying 30 passengers each, equaling 4,500 passengers an hour.
It will cut travel time from Cat Hai Island to Cat Ba Island to nine minutes from the 20 minutes by ferry, which can involve a wait of up to three hours due to congestion. The cable link significantly facilitates the access to Cat Ba Island.
Travelers are also treated to vast views of the ocean, natural limestone mountains and a fishing village beneath.
Speaking at the inauguration ceremony, Deputy PM Truong Hoa Binh said that construction of the cable car system was evidence of Hai Phong’s determination to turn the city into an attractive tourist destination.
Sun Group Chairman Dang Minh Truong said the cable car was the first in a series of tourism products that would include a golf course, a resort, a coastal cultural village, a public beach and a cruise ship port to be developed in the future.
He said the project will open new opportunities for other investors to tap into Cat Ba so that tourism becomes a key economic sector for Hai Phong, in addition to its strengths in shipbuilding and sea port services.
The northern port city is also known for its popular Do Son Beach and Cat Ba Island, the largest in the Cat Ba Archipelago. The Cat Ba National Park on the island was recognized as a UNESCO Biosphere Reserve in 2003, and is home to a number of historical sites. 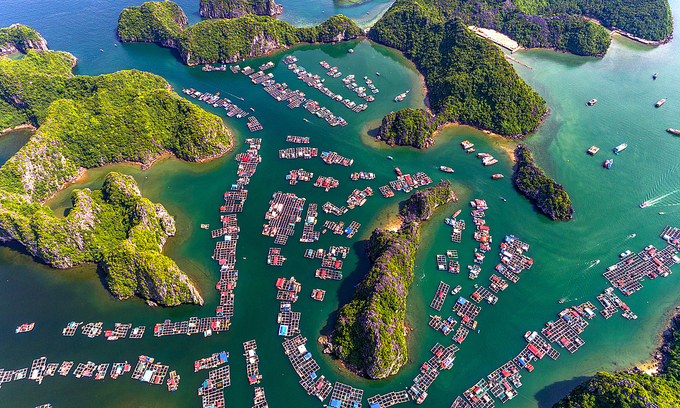 Cai Beo floating village is a must-visit place on a tour of Lan Ha Bay in Hai Phong City. Photo by Shutterstock/Jimmy Tran.
Also Saturday, Hai Phong inaugurated two other tourism projects – the Flamingo Cat Ba beach resort complex, invested by Flamingo Group, and an artificial beach stretching for over one kilometer in Do Son District, invested by Van Huong JSC.
The artificial beach, covered with yellow sand, planted with coconut palms and clear seawater will provide an alternative to the muddy waters in the Do Son area, officials said.
Posted at 2020 Jun 10 04:44
Go back