For 14 years a migrant from central Vietnam has been serving her compatriots and Saigonese original dishes from there. 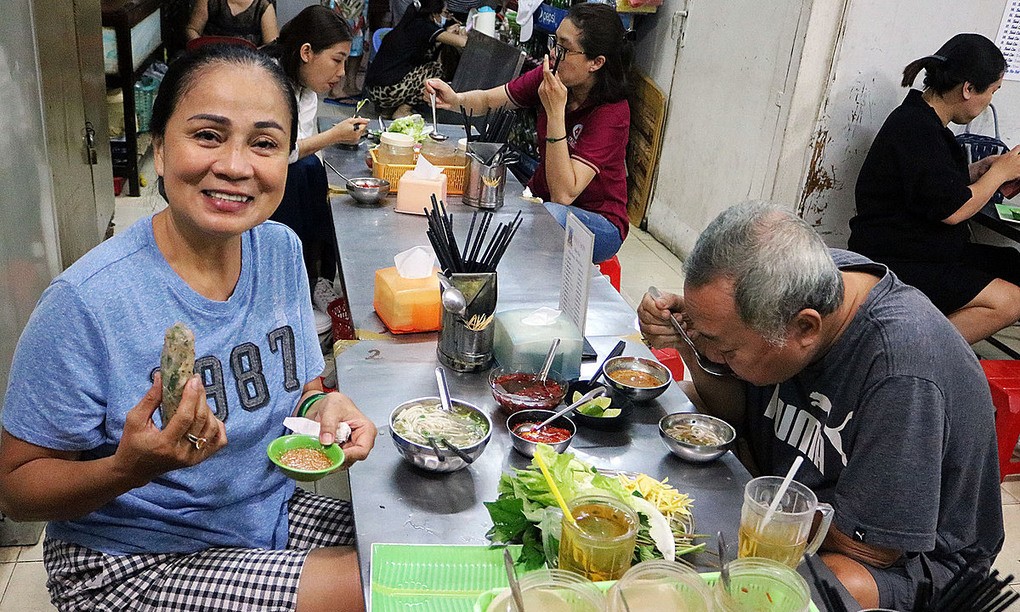 Thap Cham restaurant (Cham tower in English) is a dining destination familiar to many people from central Vietnam, especially Ninh Thuan Province.
Noodles with tuna or mackerel fish cake, tuna- base mini pancakes and fish spring rolls are the bestsellers at the restaurant at 196 Le Hong Phong Street in District 5.
A regular customer, Tu Anh Cham of Binh Thanh District, said she and her husband, who is from Ninh Thuan, enjoy the dishes. "When I look at diners at the restaurant and see anyone pouring the sauce all over the pancakes, I know they are from Ninh Thuan."
At VND25,000 ($1.1) per serving, tuna noodle soup is the most popular dish here. The cook removes the skin and bones before steaming the fish. The tuna is also prepared by stewing it with spices in central region style. Many diners prefer the latter with the pancakes.
The pancake fillings can be eggs, squid, shrimp, pork, or all of them. Diners can also opt for pancakes without any filling.
The owner’s son Duy, 30, said the dough is homemade. The rice is soaked for almost an entire day before it is ground in a mill. The liquid that comes out is used to make the pancakes.
A plate of five pancakes costs around VND50,000 ($2.2) on average, depending on the fillings.
The restaurant also serves raw vegetables with pancakes, which is the Saigon way of eating, Duy said.
As for spring rolls consisting of quail eggs, fish cakes and vegetables, a customer said diners should use a sauce made of fish sauce, stewed tuna sauce and peanuts.
The spring rolls and the tuna pancakes should be eaten with raw vegetables and shredded mango to get the full flavor.
The owner, Nguyen Thi Bong, 59, has been selling the pancakes for 28 years. The Ninh Thuan native has been in Saigon for 14 years.
She recalled what it was like in 2006, when there were three restaurants selling Ninh Thuan food in District 5, all named after Phan Rang, a famous destination in the province. She wanted her shop to be remembered differently, and so named it Thap Cham (Cham tower).
Central Vietnam has a large number of towers and other relics of the Cham kingdom.
Bong’s restaurant is open from 7 a.m. to 9 p.m. seven days a week. It is most crowded from 5 p.m. to 7 p.m.
Posted at 2020 Jul 14 21:30
Go back