Saigon to fine maskless people in public from August 5

Authorities in Ho Chi Minh City will start fining people who fail to wear a face mask in public from Wednesday, in an effort to curb the COVID-19 epidemic, the city’s chairman Nguyen Thanh Phong announced on Monday. 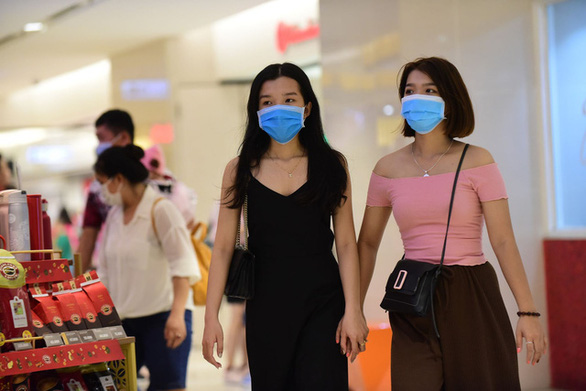 The fine will be applied in accordance with a 2013 government decree on penalties for administrative violations in the medical sector, the municipal Department of Information and Communications’ deputy director Tu Luong further explained Phong’s announcement to Tuoi Tre (Youth) newspaper on Tuesday morning.
Accordingly, the decree dictates that failure to practice personal protection measures as instructed by health authorities among those at risk of catching diseases shall carry a fine of between VND100,000 (US$4) and 300,000 ($13).
Chairpeople of district-level administrations and the director of the municipal health department will guide authorities, civil servants, public health officials, and relevant agencies in implementing the regulation.
Ho Chi Minh City will ensure enough supply of face masks for all citizens, Nguyen Thien Nhan, secretary of the municipal Party Committee, said at a meeting of the city’s Steering Committee for COVID-19 Prevention and Control on Monday afternoon.
Nhan warned that the risks of COVID-19 spreading remain high in the southern metropolis, with two potential sources being returnees from the current epicenter in Da Nang City and foreigners making an illegal entry.
However, at least 20 percent of people in the city do not wear face masks in public, Nhan added.
In March, two months after Vietnam was first hit by the pandemic, the government required that people wear face masks at crowded public places like airports, bus stations, and supermarkets.
At that time, the People’s Committee of Ho Chi Minh City also issued an official directive on penalizing people for failure to comply with measures to prevent and control COVID-19, including not wearing face masks in public.
However, people have become complacent due to the deceleration of infection rates in Vietnam, with no community-based case reported for over three months between mid-April and July 24.
The preventive measures have thus been loosely practiced, Luong said.
Ho Chi Minh City has logged eight COVID-19 cases since July 25, when Vietnam documented its first local infection after 99 days.
Vietnam has closed its borders to foreigners since March to prevent coronavirus spread.
But foreign experts and skilled workers are still allowed to enter the country, subject to government approval and mandatory quarantine.
Vietnamese returnees from abroad on board government-sanctioned planes have to undergo compulsory collective isolation as well.
Posted at 2020 Aug 05 09:35
Go back