Flight attendants have turned to left-handed jobs to supplement their lost income as airlines remain grounded due to the Covid-19 pandemic. 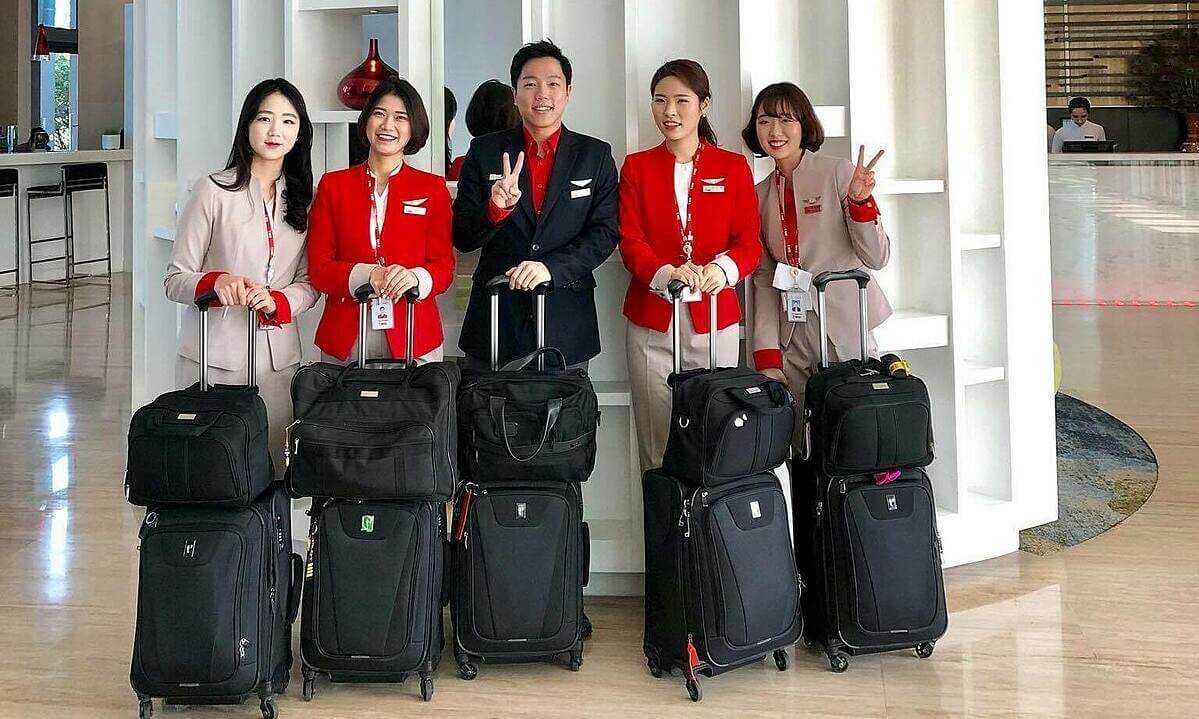 Chu Hoa (second from left) and her colleagues. Photo courtesy of Hoa.

Chu Hoa, a Vietnamese flight attendant, could not imagine the Covid-19 pandemic that started in February would linger until now. She thought she would return to work in July.
Hoa is still stranded at home in Saigon.
Before the pandemic, Hoa flew about 60-80 hours per month for a South Korean carrier, enough to provide her an abundant standard of living.
Although her airline still pays her a basic monthly salary, the 26-year-old is worried about the company's financial outlook. She also worries that foreign flight attendants like herself would get fired first if the pandemic worsened.
"I used to allocate part of my income toward savings and another to pay off a mortgage. Since my income has been reduced, I now try to spend as little as possible. It will be very challenging for me if I continue to stay at home like this," she said.
Trying to stay optimistic, Hoa sees this as a time for self-improvement. She teaches four paid classes a week on being a flight attendant, including advice on exam taking, for young people sharing the same passion.
"Many friends previously texted me to ask about my experience in taking training tests and my work. But at that time I was very tired. All I wanted to do was rest, spend time by myself and with my family. So I did not have the opportunity to advise them much.
"Since I have more free time now, I want to help others understand this profession better," she said.
Hoa has also taken classes in English and Korean, reads, and does more exercises.
"With this situation, I assume there won't be any flights from now until the end of this year even though I have not received any official announcement from the company."
In the same boat as Hoa, Ngoc Tram, a flight attendant with eight years of experience, was forced into unpaid leave since the outbreak hit. But she thinks the crisis is an opportunity for her to re-balance her life.
"In the past, I opened a small shop selling female swimsuits. But since I got busy, I neglected it. Now I have time to learn about business, improve the quality of products and services, and apply my customer service knowledge to my shop," she said.
Hai Phong, a flight attendant for a Vietnamese carrier, said that despite a reduction in salary and working hours, he still has an income from graphic design, so he "can adapt temporarily."
This job provides an equivalent of 30-40 percent of his flight attendant salary. During busy months, this income can account for around 70 percent.
Phong has taught himself to be a graphic designer for five years. Currently, his clients are acquaintances introduced by friends. He has about 7-8 customers a month.
"Soon I will set up a Facebook page and post pictures of my designs. I'll also run ads to find more clients. Currently, I spend about 4-5 hours a day designing," he said.
Phong said while many flight attendants were disappointed to see the country's second Covid-19 wave, he felt less shocked this time thanks to his experiences from the first wave. "The most important thing is to know how to protect myself and passengers."
Since flight times have been reduced, Thanh Nam, a flight attendant in Hanoi, has started venturing into the stock market. Nam had gained experience in this field after working for a securities company.
He also signed up for a Korean language course, gym, and piano lessons.
"Every industry is affected now. I hope my colleagues will retain their passion and join together to fight the pandemic," Nam said.
Trinh Vo, a 23-year-old flight attendant and mother of one daughter in Saigon, said her life has changed almost completely due to Covid-19 outbreak. The flight attendant's salary came to a sudden halt, with revenues from her filming and recording also affected.
Faced with unpaid leave for four months, Trinh practices yoga every day - her long-standing passion. Her friend recommended her to teach yoga during this period, so she decided to study for a professional yoga instructor license.
During the break, the income from yoga teaching has helped her endure this difficult time. Trinh's clients are mainly postpartum mothers who want to lose weight and get in shape.
Vietnam has experienced a second Covid-19 wave since the first domestic case was recorded in over three months on July 25. Since then the demand for domestic travel has decreased dramatically and airlines lost the chance to exploit summer tourism to make up for the first wave loss.
According to the Vietnam Aviation Business Association, airlines are still experiencing depleted cash flows even though they implemented different tactics to cut costs like selling aircraft, cutting employee salaries and reducing ticket prices.
Vietnam Airlines expects revenues this year to drop by half year-on-year to VND50 trillion (over $2.15 billion), with a loss of about VND13 trillion (nearly $560 million).
Vietjet Air's second quarter financial report shows that the budget carrier only achieved revenues of VND1.97 trillion (over $84.9 million), down 80 percent year-on-year, and recorded negative after-tax profit of VND1.1 trillion (over $47.4 million).
The International Civil Aviation Organization forecasts the world aviation industry would recover by 2024 and that Vietnamese airlines would lose over $4 billion this year.
Chu Hoa said every day when waking up, she prays 2020 would pass quickly and the pandemic cease.
Like Hoa, Trinh Vo has found ways to survive the pandemic financially but keeps dreaming about returning to the skies. "I can't quit. I love it too much," Vo said.
Posted at 2020 Aug 25 10:38
Go back