When it comes to glorious traditional crafts in Vietnam, the vibrant outfits of the Flower Hmong and Red Dao peoples of northern Vietnam usually get all the attention. But travel to the little explored Central Highlands, bordering Laos and Cambodia, and you'll find extraordinary native architecture. 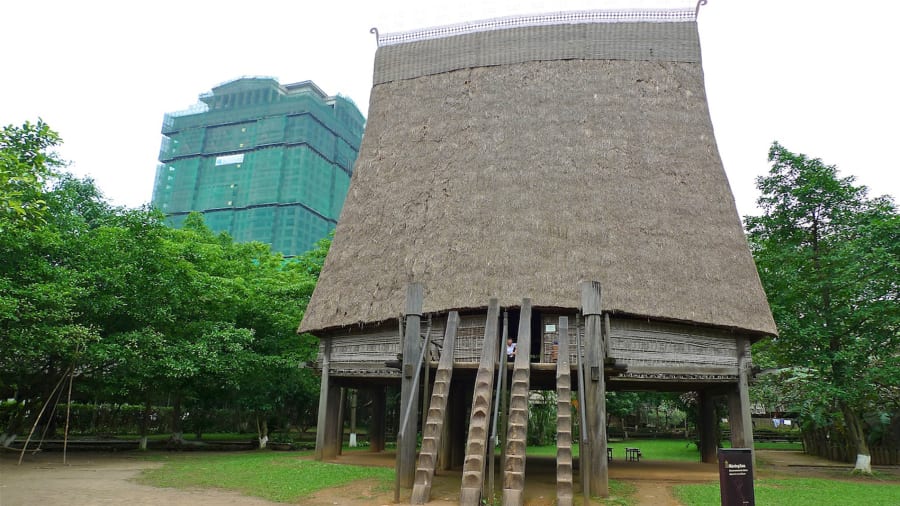 Ron Emmons, for CNN.
The Ede, Bahnar and Giarai are just three of the 53 ethnic minority groups in Vietnam, with populations of around 200,000 to 300,000 each. Their traditional homeland is in the provinces of Dak Lak, Gia Lai and Kon Tum, a region that took a battering during the wars with the French and Americans.
Added to that, they have a history of being marginalized by the Vietnamese government and are frequently involved in land disputes with kinh, or ethnic Vietnamese.
Nevertheless, these groups have clung fiercely to their traditional lifestyle, which is rich in animist rituals, and their villages have an organic feel.
Really long longhouses
The Ede build longhouses -- sometimes very long. Ede society is matrilineal, so when a girl living in the house marries, another compartment is built to accommodate her and her husband. In this way, a family's prosperity is evident from the length of the building. Some are up to 100 meters long.
They're built on low stilts and made of wood and bamboo, with a double stairway carved from logs at the entrance -- one for men and one for women.
To make it clear which is which, the female stairway is adorned with a pair of breasts. Inside the longhouse, space is divided between a communal living area and separate rooms for sleeping. The living area is often busy with women weaving -- they're famed for their brocades and use of natural dyes -- and men fashioning and repairing farming implements.
The Ede live mostly in Dak Lak province, especially in the region around Buon Ma Thuot.
Visitors who want to see the inside of the longhouses have a better chance in Ako Dhong, a village just a couple of kilometers north of Buon Ma Thuot. The friendly locals often invite strangers in to see these impressive structures, and encourage them to buy a sample of Ede weaving in the form of a shoulder bag or purse.
Tall house, the centerpiece of a village
As impressive as the Ede longhouses are, it's the tall houses of the Bahnar and Giarai that provide the most iconic sights of Vietnam's Central Highlands.
The moment you step into a Bahnar or Giarai village, your eyes are attracted to the rong, or towering communal house, which sits at the heart of every village and can reach up to 30 meters in height, though most are around 15 to 20 meters. The taller the rong, the greater the status of the village. The towering structures are built on stilts, and are accessed, as with the Ede longhouses, by sloping logs with steps cut into them.
Interiors consist of a bamboo platform big enough to accommodate all the villagers. Thatched roofs are pitched at a seemingly impossible angle, and it's evident that those who build them must have a good head for heights. The peak of the blade-shaped roof is decorated with a distinctive pattern that's different for each village.
The rong is the focus of village life.
It's used for meetings, solving judicial disputes and for the many Bahnar ceremonies and festivals, at which the locals wear their tribal outfits, play gongs and sing. The most important of these ceremonies is a buffalo sacrifice, which may be gruesome to Western eyes, but fulfills an important role in community bonding.
Like the Bahnar, the Giarai sacrifice buffalo on important occasions, one of which is to say farewell to departed relatives.
Giarai's elaborate tombs
Most Vietnamese practice ancestor worship, but none more intensely than the Giarai, for whom a funeral is a complex and expensive business.
Most Giarai villages have a graveyard to the west, which is divided into fenced-off family plots, with family members being buried in the same tomb. Prized possessions such as a TV or bicycle may be laid to rest with the dead, and simple wooden carvings of figures in a variety of moods -- pensive, glum, cheerful or sexually aroused -- are placed on the boundary of the grave.
After the buffalo sacrifice in honor of the deceased relative, the grave is abandoned and the site is reclaimed by nature.
It's best to visit a Giarai graveyard in the company of a local guide. One of the best is Nguyen Do Huynh, a knowledgeable Bahnar man who works at the Kon Tum Travel Service Center.
The Bahnar and Giarai live mostly in the provinces north of Dak Lak -- Gia Lai and Kon Tum. The town of Kon Tum is surrounded by villages with rong and it's sometimes possible for visitors to stay overnight in these fantastic structures.
On the other hand, Gia Lai in the south has a different attitude toward foreign visitors and it's not easy to go off the beaten track.
While there's no finer way of seeing the long, tall and dead houses of the Central Highlands than by going there, you can also see well-constructed versions of each type at the Museum of Ethnology in Hanoi.
Posted at 2020 Jun 10 04:56
Go back