National flag carrier Vietnam Airlines said it has resumed full domestic operations with the number of domestic passenger flights on Friday up 36 percent year-on-year to over 300. 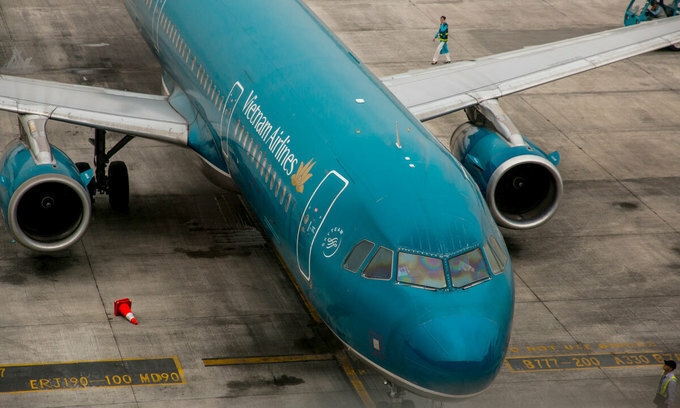 With Vietnam going over a month without community transmission of Covid-19, local airlines have begun returning their domestic operations to pre-pandemic levels.
National flag carrier Vietnam Airlines said it has resumed full domestic operations with the number of domestic passenger flights on Friday up 36 percent year-on-year to over 300.
A representative said the resumption of normal domestic schedules was a positive signal, marking strong recovery of Vietnam Airlines in particular and domestic carriers in general.
Vietnam Airlines said it was achieving an average flight occupancy of 90 percent on the domestic circuit.
Low-cost carrier Vietjet Air also said it has an average flight occupancy of 90 percent after returning to its pre-pandemic schedule of domestic flights.
Chu Viet Cuong, a senior Vietjet Air official, said the airline is currently operating 45 routes with more than 300 flights a day.
Bamboo Airways said it is reopening over 90 percent of its domestic flight routes.
From June 1, Bamboo Airways’s domestic flights would increase to 80 a day and up to 120 from June 15. The carrier plans to operate more flights to Vinh and Quy Nhon towns, popular tourist destinations in central Vietnam, during the summer holiday season.
Currently, airlines are coordinating efforts with major travel firms and resorts to develop stimulus packages aimed at restoring the domestic tourism market. The packages include preferential airfares and resort vouchers that aim to boost passenger numbers during the summer season, usually a peak time for domestic tourism.
The number of flights by local carriers Vietnam Airlines, Vietjet Air, Bamboo Airways, Jetstar Pacific and VASCO dropped by up to 70 percent year-on-year in the April 19 – May 18 period to 8,623, according to the Civil Aviation Authority of Vietnam (CAAV).
Vietnam has banned entry by foreign nationals since March 22 with exceptions and conditions, including 14-day quarantining on arrival. Since March 25, all international flights have been suspended to prevent the spread of the novel coronavirus, except for special cases like repatriation flights.
The aviation industry had been severely hit by the pandemic, and a recovery is only likely at the end of the year, the Transport Ministry said in April. It estimated that the number of air passengers this year could fall by 46 percent to 43 million.
Vietnam's National Steering Committee for Covid-19 Prevention and Control said last Thursday they are considering a pilot plan to bring international tourists to some islands.
The committee said the country could consider welcoming foreign visitors from countries and territories where there have been no new cases for at least 30 days and launch a pilot plan to bring them to some islands with strict safety measures to ensure health of both locals and foreigners.
The country has gone 45 days without community transmission of Covid-19. It has reported 328 infections without any deaths, of these 49 are active patients as 279 have recovered after treatment.
The Covid-19 pandemic hit 213 countries and territories, with more than 370,472 deaths reported.