Vietnam has brought down the pandemic situation under control in 15 cities and provinces where the virus has reappeared. 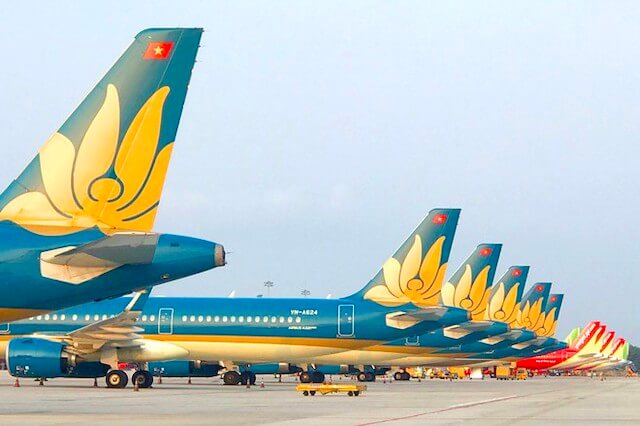 Vietnam’s Prime Minister Nguyen Xuan Phuc has asked relevant agencies to consider increasing international air connections to countries that are deemed epidemiologically safe. Hanoi Times reported.
The request was made at a time when Vietnam is striving to pursue dual goals that are containing the novel coronarius and simultaneously developing the economy.
Vietnam has suspended international flights from March 25 in an effort to clamp down on SARS-CoV-2 after the virus spread dizzily worldwide.
Since then, only repatriation flights and those carrying foreign diplomats, experts, investors, and high-skilled workers are allowed to land in the country.
Vietnam has witnessed the return of local coronavirus transmission since the last week of July. So far, it has brought down the pandemic situation under control in 15 cities and provinces where the virus has reappeared.
Important sector
Given the economic development mission, Vietnam has been taking different measures to boost economic activities, including tourism.
The World Bank has advised Vietnam to relax international travel restrictions gradually and carefully to balance it with safety concerns as the country’s economy is heavily dependent on inbound tourism, and foreign investment and external trade.
This recommendation is among three complementary measures the World Bank suggested in the report titled “What will be the new normal for Vietnam? The economic impact of Covid-19”.
According to the World Bank, while Vietnam’s economy has been seriously impacted by Covid-19, it remains resilient and is poised to bounce back.
It said if the world situation gradually improves, economic activity should rebound in the second semester of 2020 so that the economy will grow at around 2.8% for the entire year, and by 6.8% in 2021 and 1.5% and 4.5%, respectively for less favorable external conditions.
In 2019, Vietnam welcomed 18 million foreign visitors, earning an amount of VND726 trillion (US$31.56 billion).
Meanwhile, Vietnam’s aviation industry posted two-digit growth in the past years.
Before the resurgence of the virus, the country had gone 99 days without locally-transmitted infections.
According to the Hanoi Times, Vietnam has gained international praise for its early response and aggression against the pandemic and the more-than-three-month streak of non-local infections.
International visitors and net citizens have continuously listed Vietnam among safe travel destinations since the virus detected in the country late January 2020.
By Linh Pham
Posted at 2020 Aug 29 09:23
Go back