An abandoned church in Nam Dinh and the cluster of Hindu temples at My Son are on CNN’s list of abandoned sacred places. 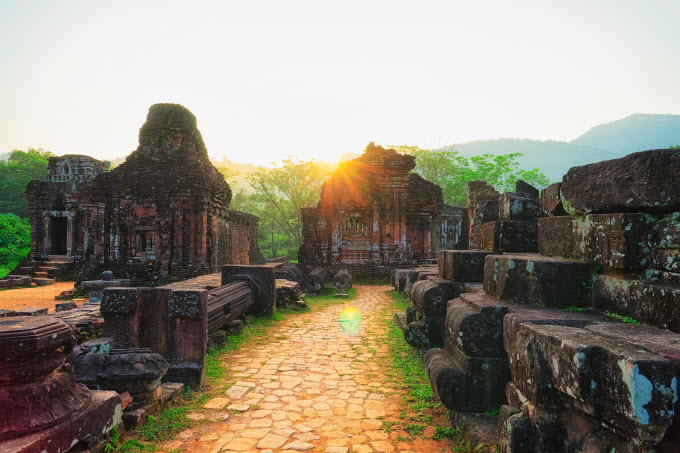 St. Maria Madalena Church, better known locally as the "Heart" church, is situated on a beach in Hai Hau District in the northern province of Nam Dinh. Badly damaged by coastal erosion, it has been abandoned since 1996.
It was built in 1943, and used to be a part of a complex of small and large churches, but after time and nature took their toll, it is the only one standing. But even it is only a skeleton, with the inside damaged, and is now called "ruined church."
When the tide is in, the church goes under a meter of water. When the tide is out, it makes an ideal backdrop for wedding photos and souvenirs to take home.
The UNESCO heritage site My Son Sanctuary in the central province of Quang Nam is a complex of abandoned and partly ruined Hindu temples constructed between the 4th and 14th centuries by the Champa, a united kingdom of various groups of the ethnic Cham.
"Only 25 of 70 temples survive, the rest were destroyed by U.S. bombing during the Vietnam War," CNN said.
The My Son cluster is regarded one of the foremost Hindu temple complexes in Southeast Asia. It is often compared with other historical temple complexes in the region such as Borobudur in Java, Indonesia, Angkor Wat in Cambodia, Bagan in Myanmar, and Ayutthaya in Thailand.
In Southeast Asia, Borobudur, the world's largest Buddhist temple in Indonesia and the Bagan Buddhist temples of Myanmar are also on CNN’s list.
Other historical and religious places in the world that have been abandoned for years are the Nubian pyramids in Sudan, the Kandariya Mahadeva Temple in India, the tombs of Al-Bagawat in Egypt, and Church of the Holy Redeemer in Turkey.
Posted at 2020 Jun 06 06:21
Go back