A Guanyin statue in the central city of Da Nang is among the best travel photos of the year in a CNN listing. 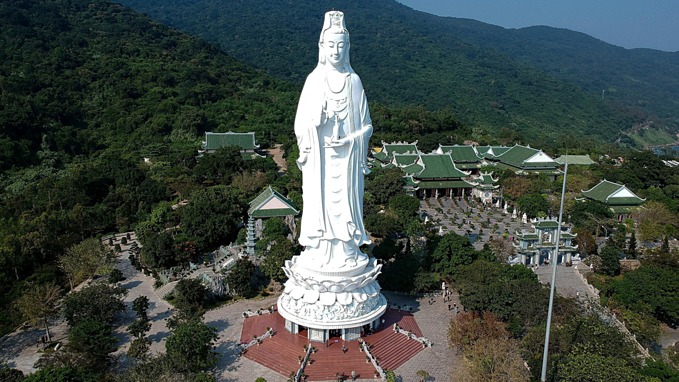 The U.S. cable network has included an image of the white Guanyin statue in the Linh Ung-Bai But Pagoda on the Son Tra Peninsula, around 10 kilometers from Da Nang's center, in its global photo collection for the year.
The photo is in the top 30 of a list that contains 58 photographs in total.
The Guanyin statue is considered as the highest in Vietnam to date, towering at 67 meters.
Legend has it that a Buddha statue drifted downstream to the region and ran aground on a sandy embankment in the 19th century under the reign of King Minh Mang, the second emperor of the Nguyen Dynasty, the last royal family in Vietnam’s feudal history (1802-1945).
Local fishermen thought it was a good omen and built a small pagoda to worship the statue. During the Vietnam War, the pagoda and the Buddha statue were almost totally destroyed.
The sandbank where the Buddha statue drifted was then named Bai But (Buddha's Sanctuary) and the Linh Ung Pagoda was built there.
Construction of the pagoda started in 2004 and finished six years later in 2010. Linh Ung Pagoda is considered as a symbol of the rise of Vietnam’s Buddhism in the 21th century.
Vietnam is a predominantly Buddhist nation. It is estimated that over 70 percent of the population are either Buddhist or follow Buddhist practices.
Earlier this year, the image of a woman collecting incense sticks in a courtyard in Quang Phu Cau Village on the outskirts of Hanoi was highlighted on the CNN list.
Last year, a picture of the 150-meter-long Golden Bridge in Da Nang City was named one of the top 100 travel photographs of the year by CNN.
Posted at 2020 Jun 06 06:23